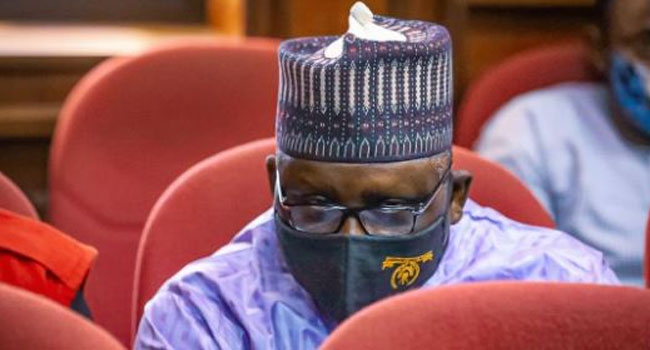 Maina (the applicant) listed the Minister of Interior and Controller General (C-G) of Nigerian Correctional Services Centre as 1st and 2nd respondents respectively.

In the application, Maina, who is currently serving his jail term at Kuje Prison, prayed court for an interim order directing the minister and the C-G to immediately take him to a reputable and recognised hospital for treatment of his life-threatening diseases pending the hearing and determination of his originating motion

He also prayed for an order granting him leave to effect the service of the order, the originating motion and other subsequent processes on the respondents by substituted means.

Giving 10 grounds why the motion should be granted, Maina said the failure to treat the diseases/sicknesses he is suffering had led to his incapacitation and deterioration of his health.

According to him, there is already a likelihood of contravention or infringement of the applicant’s rights to life, dignity of human person and freedom from cruel, inhuman or degrading treatment.

“Applicant is in a critical health condition that requires urgent medical attention, hence the need for prayer one on the face of this application.

“Applicant’s fundamental rights to life, dignity of human person and freedom from cruel, inhuman and degrading treatment are seriously under challenge and continually being breached by the respondents,” the motion read.

He said it was in the interest of justice to grant his application.

After Mr Ibrahim Idris, SAN, who appeared for Maina, took the motion upon resumed hearing, Justice Ekwo granted leave for Maina to effect service of the order and other processes on the minister through any member of staff of Ministry of Interior, Abuja.

The judge also directed that all processes for the C-G be deliver to any officer of the Correctional Services Centre at the Headquarters in Abuja.

Ekwo consequently ordered the applicant to put the respondents on notice within three days of the order and adjourned the matter until Oct. 24 for motion.

Justice Okon Abang of a FHC had, on Nov. 8, 2021, convicted and sentenced Maina to eight years’ imprisonment for misappropriating N2 billion pension fund while serving as chairman of PRTT.