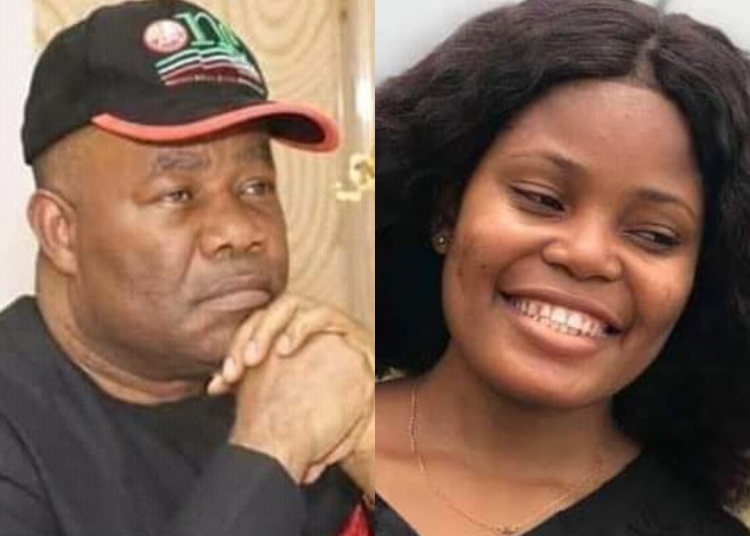 The Minister of Niger Delta Affairs, Godswill Akpabio has denied involvement in the procurement, sale and/or use of human body parts for ritual.

Akpabio, who is a former Governor of Akwa-Ibom, stated this after an independent investigation linked him to the brutal murder of Iniobong Umoren by Uduak Frank Akpan.

The independent investigation carried out by one David Hundeyin also linked one Kufre Effiong, a property, and a hotel to the murder of Iniobong.

The hotel, located at 58, G Unit, Ewet Housing Estate was linked to the wife of the Niger Delta Affairs minister, Mrs. Ekaette Unoma Akpabio, while Effiong was linked as under the employ of Mr Akpabio.

However, the Akpabios, through their lawyer, Otobong Inyang have publicly denied any connection to the characters and properties fingered in the investigation.

The lawyer argued that the investigation created the impression that the Akpabios were not only complicit in the death of Iniobong, but also members of a syndicate “specialising in the procurement, sale and/or use of human body parts for ritual.”

In a legal notice addressed to the publisher of the investigation by Inyang, the Akpabios demanded retraction and threatened legal action.

The legal notice reads below:

PUBLICATION OF FALSE AND DEFAMATORY STATEMENTS AGAINST HIS EXCELLENCY, SEN. (DR.) GODSWILL OBOT AKPABIO AND HER EXCELLENCY, MRS. EKAETE UNOMA AKPABIO: DEMAND FOR IMMEDIATE RETRACTION AND AN APOLOGY.

Our services as Solicitors have been retained by Sen. (Dr.) Godswill Obot Akpabio and Mrs. Ekaette Unoma Akpabio, both of Ukana Ikot Ntuen, Essien Udim Local Government Area (herein referred to as “Our Clients”) and we have their instructions to write to you concerning the above subject matter.

Our clients brief is to the effect that you represent yourself as an Investigative Reporter, Columnist and Writer and in the said capacity, you issued a purported investigative report regarding the alleged abduction, rape and murder of one Inlobong Umoren, the late University of Uyo graduate.

In the said Report which you published on Your Twitter handle @DavidHundeyin, Facebook Page/Timeline and on several online news channels/platforms such as NewsWireNGR of 11/5/2021, e.t.c., you alleged that a certain Kufre Effiong was complicit in the alleged murder and also attempted to portray our clients as being members of an alleged syndicate responsible for perpetuating the dastardly act.

In a paragraph in your said report, you made the statement thus:

“Who exactly is Kufre Effiong? I eventually found the answer after scrolling through dozens, maybe hundreds of social media profiles with that exact name. Mr. Effiong as it turns out, is something of a big fish in Niger Delta civil service circles.”

After having alleged that subsequent to the abduction, rape and murder of the deceased, Uduak Akpan met with Kufre Effiong, you went on to state in another paragraph of your report thus:

“The second possibility is more prosaic, but no less horrific. Due to the convoluted house numbering system in Uyo, the property labeled as 58, G Unit, Ewet Housing Estate is also recognized on most digital maps as Plot S. 9, Unit G, Ewet Housing Estate. That address is also home to Davok Suites, which is a popular upmarket hotel in Uyo favoured by high profile guests including the Cameroon national team. This would be the ideal location for a trusted associate of a politician – say, a senior civil servant – to lay his head while running clandestine errand for his boss. An errand such as sourcing human parts for use in a ritual sacrifice ahead of the upcoming election season, for example. Whatever it is that happened or is happening at 58, G Unit, Ewet Housing Estate – and for whose benefit is a question only Kufre Effiong can answer…

In one of your Tweets via Twitter handle @DavidHundeyin of 11th May, 2021, you published the following statement to the entire world:

“It has just come to my attention that Davok Suites, the hotel at the centre of the 58 Unit G/S.9, Unit G, Ewet Housing Estate nexus involving Kufre Effiong and Frank Uduak is owned by none other than Ekaette Akpabio, wife of Godswill Akpabio.”

Again, same day and still through your above referred Twitter handle, you retweeted thus:

“In other words, this place where Frank Uduak Akpan, fresh from murdering Ini Umoren came to meet Kufre Effiong, belongs to the wife of Kufre’s boss and Federal Minister of Niger Delta Affairs Godswill Akpabio.

So which politician has Kufre been “running errands” for?”

The implications of the above statements which has enjoyed wide circulation, as you would have expected or wished, cannot be lost on any reasonable person. They said statements without doubt were made to create the following impression:

1. That Sen. Godswill Akpabio and his wife – Mrs. Ekaete Unoma Akpabio were not only complicit in the death of Iniobong Umoren, but are also members of a syndicate specializing in the procurement, sale and/or use of human body parts for ritual;

2. That Davok Suites alleged to be owned by Mrs. Ekaete Unoma Akpablo – Senator Akpabio’s wife, is used by members of this alleged syndicate, particularly Uduak Akpan and Kufre Effiong, to carry out their illicit transactions.

We hasten to make the point that assuming (though without conceding) that Kufre Effiong is a staff of the Ministry of Niger Delta Affairs and/or one of its Contractors, Senator Akpabio does not know, has never met and has never had any contact whatsoever with him. Neither Sen. Godswill Akpabio nor his wife Mrs. Ekaete Unoma Akpabio had anything whatsoever to do with the horrific death of Iniobong Umoren.

Secondly, neither Davok Suites (which is a corporate entity) nor the land housing it belongs to Mrs. Ekaete Unoma Akpabio.

Indeed, a proper search at the Corporate Affairs Commission would have disclosed to you that Mrs. Ekaete Unoma Akpabio is neither one of the Directors nor\ Shareholders of Davok Suites. Also, an investigation at the Akwa Ibom Property & Investment Company (APICO) Office (the operators/managers of Ewet Housing Estate) would have disclosed to you the fact that Mrs. Ekaete Unoma Akpabio is not the owner of 58 Unit G/S.9, Unit G, Ewet Housing Estate, as falsely, maliciously and recklessly alleged by you.

In light of the above, our clients’ demands are thus:

1. An immediate retraction, by you, of all your publications and/or parts of them tending to show that our clients are/were complicit in the abduction, rape and gruesome murder of late Iniobong Umoren.

2. An immediate retraction, by you, of all your publications and/or parts of them tending to show that our clients are members of a syndicate specializing in the procurement, sale and/or use of human body parts ritual.

3. An immediate retraction, by you, of your false publication that Mrs. Ekaette Unoma Akpabio is the owner of Davok Suites. 4. An unreserved public apology to our clients regarding the said false, reckless and very malicious publications.

5. The retractions and public apology must be published by in NewsWireNGR, your above referred Twitter Handle, Facebook Page/Timeline and all other online news/media platforms and channels where you made the libelous publications. TAKE NOTICE that if you fail to comply with our clients’ above listed demands. within 14 days of your receipt of this letter, we will not hesitate to take out a lawsuit against you and all concerned.

Meanwhile, Hundeyin has dared the Akpabios to follow through with the legal threat.

I want him to sue.

Hi @Senator_Akpabio, this has come to my attention.

First of all, no idea why the lawyer you hired addressed it to BusinessDay as if I work there🤷🏿‍♂️