by Bartholomew Madukwe
in Entertainment, News
Reading Time: 3 mins read
735 7
A A
0 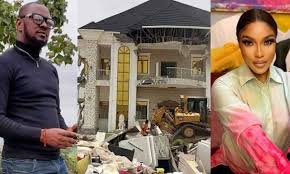 Joseph Egbri, aka Kpokpogri, a politician and former lover of actress, Tonto Dikeh, has finally cleared the air about the role Nollywood actress played in the recent demolition of his house in Abuja.

Kpokpogri pointed out that the Federal Housing Authority (FHC) and Federal Capital Territory Administration (FCTA) are liars from the pit of hell to have said they had given him several notices before the building was eventually demolished.

“They had the audacity to come into somebody’s property, without prior notice, and demolished it because they are in power. Very soon, they will leave power, and the same treatment they meted out to others would be accorded them.

“It was after I built the house that the place became habitable, and activities began to pick up in the area. I daresay it was that building that attracted development in that area. The place was practically a bush for many years.

“Even the original allottee got that allocation in 2015. If they knew there was to be a road there, why did they not revoke it (the allocation)? When I was building (my house), the FHA usually came to supervise the building from the beginning to the end. Even when I was putting up a fence, they came.

“They just came from nowhere with a vicious excuse which I consider to be an afterthought that a road is supposed to pass through my house. There are empty lands there (in the area) that people have not built, why doesn’t the road go through those on occupied lands, he said.

Talking about the role Tonto Dikeh played in the demolition of his house, Kpokpogri asserted that those linking her to it are liars.

“Those are lies. Tonto has nothing to do with it. She knows nothing about what happened there. I believe there are some people behind what happened and God is going to expose them all. They will suffer 10 times what I did on that day, because that thing (demolition) is not ordinary.

“I cannot kill myself. I have my kids to live for. There are also many youths who depend on me to survive. I don’t care what she is saying. I don’t even want to say anything about that girl. I don’t want to be involved in anything concerning her,” he added.

Tonto Dikeh’s former lover noted that the reason his house was demolished has nothing to do with the claim that it was because there was to be a road there, but because he is not a northerner.

In his words: “This same thing has been done to many of our southern and eastern brothers. There is a man who built a very massive estate of over 100 units here in Abuja. But, because he is from Anambra State, when the man was building, nobody went there to put up any notice (for him to stop work).

“But, as soon as he finished building, they went to mark the place for demolition. What kind of oppression is that? Something needs to be done about that. I am sure something like this would not have happened to a northerner in a place like Asaba or Warri (Delta State).”

On how he acquired the land, Kpokpogri explained that it was a lawyer in the FHA, one Mr Uche, that sold the property to him.

“Being a civil servant, he should have known that a road would pass through the property he was selling, so why did he involve himself in that kind of transaction.

“After buying the two plots, I took my building design to them. When they saw the design, they condemned it. They said they were the ones that would draw the design for me, that they could not allow me to go ahead with it.

“I said if that was the case, so be it. They then did the design, signed it, brought it back to me, and gave me a copy after I had paid for my building development.

Kpokpogri opined that the minister that ordered the demolition of his house does not have the fear of God and kind of house, saying “even when his personal assistant, Sani Daura, came to my house, the first thing he said was, ‘Oga, this your house is beautiful. Even my boss does not have this kind of house”.

TheNewsGuru.com (TNG) recalls that the FCDA claimed the demolished building (Kpokpogri’s house) was obstructing a road alignment that was designed to serve as an important bypass to the Abuja-Keffi axis.

Reacting to the claim, he said: “Those are lies. Go and check the Abuja masterplan, if there is any road like that passing through that place. Go and check the FHA master plan. I went to the FHA three times and they asked me to go, that my house would not be affected.”