A group under the aegis of PETER OBI FOR PRESIDENT 2023 has described Jude Ezenwafor, who was recently declared as Labour Party’s presidential candidate by a faction of the party, as a tool in the hands of those that see Obi’s Presidential aspiration as their biggest threat.

Obi, who vied for the position of vice-president in the 2019 Nigerian general election under the People’s Democratic Party (PDP), was elected as the party’s presidential candidate at a primary election.

A faction of the Labour Party, led by its former Deputy National Chairman, Callistus Okafor, on Wednesday elected Ezenwafor as its presidential candidate for the 2023 general elections. Reacting to the development, the group in a statement by Ebuka Okoye asserted that Ezenwafor is a member of All Progressive Grand Alliance, APGA.

According to the group, the declaration of Ezenwafor as LP’s presidential candidate was a mind game stretched towards meddling with the minds of Peter Obi’s supporters.

The statement partly read: “He was deployed to distract teeming Nigerians that are yearning for Obi’s emergence as the President of the federal republic of Nigeria. Declaring himself as LP’s presidential candidate is a mind game stretched towards meddling with the minds of Obi’s supporters.

“We’ve overcome the initial speculation that our vote will not count, and they’re on another devil’s mission to whistle our hope from discharging our legal rights as citizens of this great country.

“Remind you that these bad eggs, will not stop from playing their mind games. This is to further prove to us that we’re doing very well with this project.

“It should also encourage us to sustain the tempo and prove to them that we are their doom. The end of their game starts with and will end with us.

“Never again! Enough is enough!! We must take back our country from them!!!” 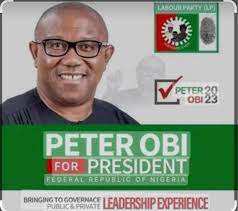 Matthew Onumanyi:
“If he’s a member of apga, why allowing himself to be used for this, an Igbo man for that matter…?”

Shedrack Chinedu Nwankwoeke:
“Why Igbo man always allowed to be used against his brother, God have mercy on Igbo’s.”

Akudo Humble:
We are pushing it because of the individual involve called Peter Obi not because of party called labour party so if he is the one youth might not be interested as the are now…So pls nwanna keep calm he might give you appointment then you wait for 2030….I come in peace.”

Harrison Okafor
“South East youths should first of all teach him a lesson. No one can stop Obi’s movement.”

Gandulong Zhattau:
“Chief Ezenwafor is a joker to say the least. If he wants to join the train and be part of this success story for President Peter Obi come 2023, he is free to do so.”

Bala Ovyedivine Ubangari:
“I think this is Critical and the Right Time for Igbo’s to Take a Stand to DEAL Decisively with these kind of usable tools of evil among them, and also the Well meaning Nigerian youths on this movement to take a Strong Stand and be Ready for any eventuality that may rise against this Course of taking back our Nation from the evil politicians.

“Note that as the political activities progresses, some of our gullible youths will be used against this movement, but for sure we Must Remained United across tribes, religion’s and region to have this achieved, with Almighty God on our side we’ll Succeed!”