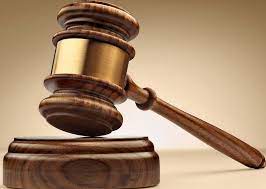 A man, identified only as Damilare, has been arraigned before Justice R. A. Oshodi of the Lagos State High Court sitting at Ikeja for allegedly raping a minor, after promising to give her money and buy her a phone.

The 16-year-old, who was aged 14 at the time of the incident, Tuesday, informed the court that the said man (accused) met her on her way to a salon.

Man to spend 37yrs in prison for forcing 13-year-old girl to suck his pen!s

“I said my parents would complain. He then asked to take me to his house, but I said no because my parents sent me to go and have a haircut,” she added.

During cross-examination by the defence counsel, she explained that the defendant dragged her into his house, took off her pants and raped her, adding that when she screamed, he used his hand to cover her mouth.

She said, “He pushed me on the bed, removed my pants and raped me. When I screamed for help, he used his hand to cover my mouth.”

The 16-year-old said she noticed that she was bleeding after the attack.

The case was adjourned till October 26, 2022, for further hearing.

TheNewsGuru.com (TNG) reports that rape case is on the increase in the Nigerian courts, as even clergies have been accused of committing same.

A Lagos clergy, identified as Bishop Daniels, had been accused of raping a 22-year-old assistant female pastor at his house in the Lekki area of the state.

According to the victim, Daniels, who is married with children, allegedly raped her on two separate occasions, adding that she bled during the incident.

It was gathered that the victim, who was based outside Lagos, was summoned to the Lagos headquarters of the church where the incident happened.

She said, “He wanted me to attend a meeting and the date clashed with my brother’s wedding. So, I didn’t attend the meeting and as punishment, he ordered church members at my branch not to celebrate my birthday and instructed me to report to the church’s headquarters in Lagos for punishment.”

What would President Buhari be remembered for after 2023? - By Mideno Bayagbon