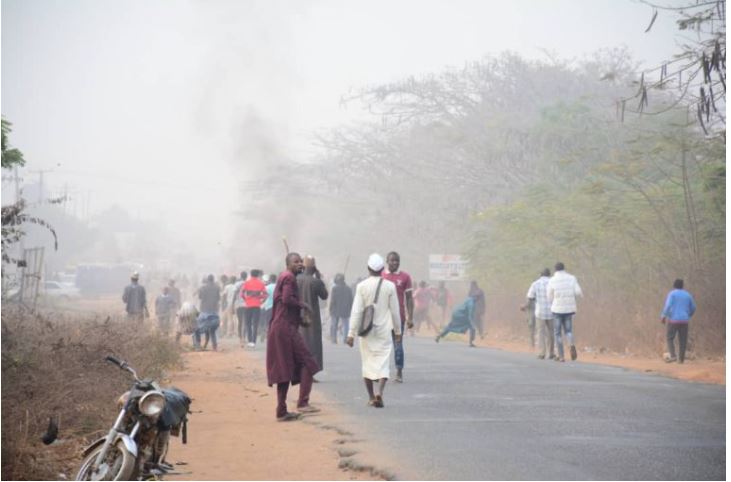 Scene of a protest over the use of Hijab in some schools in Kwara on Thursday in Ijagbo, Oyun Local Government Area of the state.

A number of persons on Thursday sustained various degrees of injuries as protest over the use of Hijab thickened in Oyun Baptist High School, Ijagbo, in Oyun Local Government Area of Kwara.

The News Agency of Nigeria (NAN) reports that a man in his early 20s was seen being rushed to a nearby hospital after he was reportedly shot at.

NAN recalls that the use of Hijab had generated controversy in some missionary schools in the state over the past few months.

The State Government had on Jan. 25, restated its policy and directed management of schools in the state to allow the use of Hijab by willing Muslims without forcing it on anyone or turning them back for using it.

Some Muslim parents and their wards were seen on some major streets of Ilorin on Wednesday protesting against the management of Oyun Baptist High School for turning back some students for wearing Hijab.

A government delegation, led by the Commissioner for Education, Hajia Sa’adatu Kawu, had twice visited the school to resolve the matter.

Another delegation led by the Commissioner for Local Government and Chieftaincy Affairs, Mr Mohammed Saifudeen, also visited the town for the same reason on Thursday.

Fracas however erupted on Thursday when some Muslim parents stormed the school premises to protest the rejection of their wards and members by the school.

Eye witnesses told NAN that the peaceful protest later degenerated into violence when an unidentified man rushed to the school to inform other protesters of a machete cut.

This triggered an angry reaction from the Muslim protesting parents as they looked around for various weapons to defend themselves, but the police swiftly dispatched them.

The police fired warning shots into the air and also use teargas to dispatch the protesters in order to control the situation as unidentified persons from inside the Oyun Baptist High School, were seen throwing missiles at those outside the premises.

Normalcy was however restored by a combined team of police and Nigeria Security and Civil Defence Corps (NSCDC).

Confirming the development, the Public Relations Officer of the Kwara Police Command, SP Ajayi Okasanmi, said security personnel had been deployed to the scene to restore peace.

Okasanmi told NAN that normalcy has returned to the school and that security operatives would remain there until the area was safe for the residents.

"The coup in Mali was contagious" - Nana Akufo-Addo