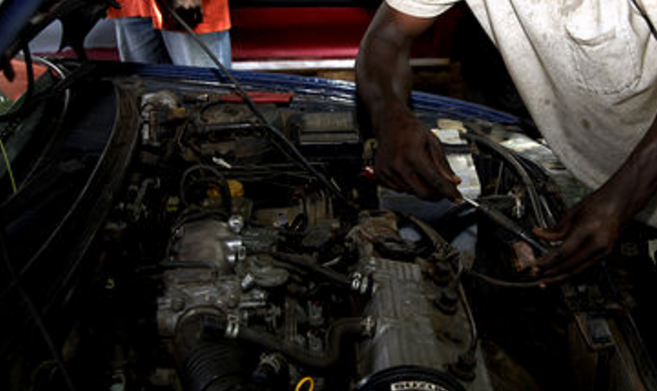 For allegedly cheating and maliciously damaging a car valued at N500, 000, a mechanic was on Thursday in Lagos granted N50,000 bail.

An Ikeja Magistrates’ Court also directed the accused, Ogunwale Yemi, 30, to provide one surety as part of the bail conditions.

The Chief Magistrate, Mr Alexander Komolafe, said the surety should be gainfully employed and show evidence of three years tax payment to the Lagos State Government.

Komolafe directed that the accused be remanded in Kirikiri Prisons pending the perfection of his bail conditions.

The accused, a resident of Odogunyan, in Ikorodu area of Lagos State, is facing a two- count charge of cheating and malicious damage.

Earlier, the Prosecutor, Sgt. Joseph Ajebe, told the court that the accused, committed the offences on Nov. 16, 2015 at No. 11, Alhaji St., Shogunle, Oshodi, Lagos.

He said that the complainant, Mr Agada Emmanuel, had given his Mitsubishi car with registration number, EY 796 AA, to Yemi for repairs.

He said that the complainant gave the accused N8,000 for workmanship.

He said that the complainant had not seen him since the accused collected the money only to discover that the accused had damaged his car.

“The accused converted the N8,000 to his own personal use, damaged and removed some spare parts from the car valued at N500,000,’’ the prosecutor said.

He also said that the accused abandoned the car and absconded until he was apprehended by the police.

The accused pleaded not guilty to the charges.

The Chief Magistrate adjourned the case to Jan. 23, 2017 for mention.

In Urhobo land, I grew up to meet it. Men with only one wife were looked down upon. My paternal...