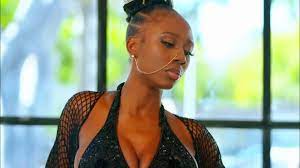 Famous entertainer, Anita Obidi Korra, professionally known as Korra Obidi, has shaded “Yahoo boys” as she narrated her encounter at the hand of Mexican fraudsters who accessed her debit card to purchase multiple items.

In a Facebook live video, the mother of two lamented how her credit card was allegedly debited multiple times at an airport restaurant in Mexico.

TheNewsGuru.com (TNG) reports that Korra Obidi emphasized how her bank in America was swift enough to block access to the card before further damage was done to her savings.

In her words: “Guys, the first thing has happened in Mexico. I just got seven notifications…remember that place…the place that had the Margarita Ville…that I bought a $35 Margarita from?

“Remember that place that I told you that I felt like I was scammed; at the airport…the place that had a drink for $10 and all of a sudden the drink is $35. I just got a security alert from wings stop…someone has spent my credit card on some wings, and then I got another alert for some fast food, $285 of my money on wings.

“This is worse than Lagos, we are learning in their hands. Yahoo dey learn for their hand. Yahoo yahoo boys need to come and learn work from Mexicans’ hands.

“I’ve called the Bank of America. Thank God for the most amazing bank ever. I called them in five seconds, someone picked up the call and they blocked this card. I can’t eat, but they said they’re going to give me my money back.”

The entertainer, who hails from Oshimili North area of Delta State, is well known across significant Nigerian web-based media spaces graciously of her full utilization of every stage as a platform for transferring her contents including dance recordings.

Recall that Korra Obidi’s husband, Dr. Justin Dean, had released evidence that his wife was allegedly having an affair with ace Nigerian music producer, Michael Ajereh, popularly known as Don Jazzy, while pregnant.