My wife died due to childbirth complications – MC Bonus 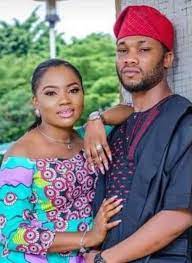 Lagos-based comedian, Emanuel Chigozie, MC Bonus, has broken the silence on the death of his wife, saying she died due to childbirth complications.

According to him: “Since yesterday I have been hearing news around all social media platforms about the demise of my wife, and the news has been surprising.

“It’s a grieving time for me, and I don’t like discussing my family matter on social media, but, in order not to leave a wrong impression about myself, my daughter we had together and the memory of my late wife, it is very important I clear the air on the matter on the ground.”

He stated that he and his wife have been committed to each other, but as life would have it, every family has its challenges, adding that he is not a woman beater and never ever beat up his wife, not to talk of being inhumane to do so during pregnancy.

MC Bonus asserted that the photos of scars on his wife’s body making round the internet were taken during Covid-19, 2 years ago when he was preventing her from tearing their marriage certificates and breaking their wedding photos.

He also said that he and his late wife separated in 2021 because of some issues, and that he advised to leave separately till they resolve their issues.

Even after the separation, he was responsible for them by supplying all their needs, although both families have been meeting to make sure they come back together again before she died.

Bonus comedian added that his wife died due to some childbirth Complications.

He was called by his neighbor who took her to the hospital when her pregnancy started disturbing her, and on getting to the hospital he was told the mother and child couldn’t make it.

Lastly, he said that the allegations about him are completely untrue and contrary to the news, he is not running, he is available and investigations are ongoing, so he has begged everyone to pray for him in these trying times.

Recall that some days back, the news went viral that he had a hand in his wife’s death.

While in matrimony, my ex-wife, Mercy Aigbe was dating Kazim, ex-husband alleges

[Devotional] IN HIS PRESENCE: Lessons from the ants