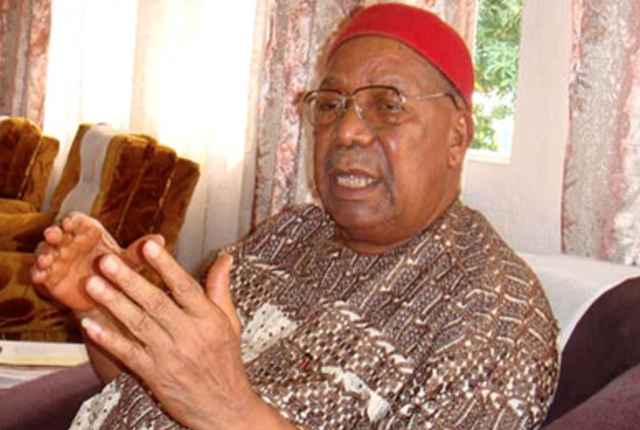 Amaechi, a first Republic Minister of Aviation, popularly known as ‘The Boy Is Good’, died on Tuesday at his country home, Ukpo at the age of 93.

The apex Igbo socio-cultural organisation made the eulogies in a statement signed by its National Publicity Secretary, Mr Alex Ogbonnia and made available to newsmen in Owerri on Tuesday.

What George Obiozor said about Peter Obi before passing on – Ohaneze

Ogbonnia said Amaechi, a former parliamentarian, mortgaged the bloom of his youth to fight for Nigeria’s independence in spite of several arrests and detentions by the colonial authorities.

“This is a tribute to a rare courage, uncompromising principle, sacrifice, stoic heroism, patriotic dispositions and extra-ordinary faith in the struggle for Nigerian independence.

“These attributes earned Amaechi the Member of the Parliament at a very young age of 29, parliamentary Secretary and subsequently the Minister of Aviation of the Federal Republic of Nigeria in the First Republic,” he said.

He extolled  Amaechi ‘s eloquence  and his efforts, both in youth and at old age, despite his  failing health, to proffer solutions to challenges of national and continental and global  concern.

“Amaechi’s voice waxed eloquent to the universal advocacy that it is the turn of the South-East to produce a president in Nigeria.

“Earlier, in 1963, when the obnoxious Apartheid regime in South Africa was at its peak, in agreement with Dr. Nnamdi Azikiwe, the freedom fighter, Dr. Nelson Mandela,  escaped South Africa and the home of Chief Amaechi, in Ukpor, Nnewi South Local Government Area, Anambra, was his shelter.

“Mandela stayed in Ukpor for about six months. It was on departure from Lagos in 1963 that the Apartheid regime traced him and arrested him on arrival at Johannesburg,” he recalled.

He prayed for a peaceful repose of Amaechi and of all patriotic Nigerians who contributed their quota to her independence.

“Our President-General, Prof. George Obiozor, is deeply pained over this irreparable loss; but adds that the life of Amaechi is a veritable lesson in uprightness, selflessness and heroism.

“On behalf of Ohanaeze Ndigbo Worldwide and indeed all the Igbo sons and daughters, we pray that the Almighty will grant the soul of Chief Mbazulike Amaechi an eternal rest in his bosom,” he said.