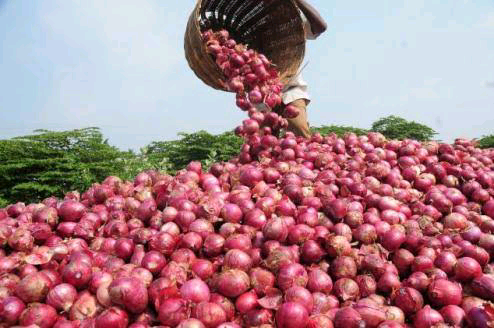 The Onion Producers and Marketers Association of Nigeria has threatened to stop the supply of onions down to the South from June 7, 2021.

The group said it would carry out the threat if the government fails to compensate its members who have suffered losses in recent times following attacks in some parts of the country.

President of the association, Aliyu Umar, made this known to journalists at a press briefing on Sunday in Sokoto State.

He explained that the government under a committee led by the Kogi State Governor Yahaya Bello had promised to compensate their members, many of whom suffered huge losses in Abia, Imo and Oyo States during the #EndSARS and Shasha market crisis.

However, according to him, the promise has not been kept and the members have reportedly lost over 4 billion naira.

“We also call on state governments to collaborate with fed govt to set up a committee to investigate the incident that led to the loss of lives and property of the Onion Association members.

“Furthermore, if the government fails to adhere to what we are saying, we are shutting the supply of onion to the entire south by Monday the 7th of June 2021”.

Anambra 2021: Why everyone wants a piece of Valentine Ozigbo

Anambra 2021: Why everyone wants a piece of Valentine Ozigbo