Home » News » Queen Mercy breaks down into tears as fans gift her N2M, others as birthday token

Queen Mercy breaks down into tears as fans gift her N2M, others as birthday token

Former Big Brother Naija ‘Shine Ya Eye’ housemate, Queen Mercy Atang, popularly known as Queen, has broken down into tears after her fans gifted her two million naira and other gift items as a token of appreciation for her 27th birthday.

The reality star who marked her birthday yesterday, the 11th of June with a note of appreciation to fans and well wishes received follow-up overwhelming gifts.

The Monarchs treated their favorite reality star with the sum of N2M, and other gift items worth close to a million naira. 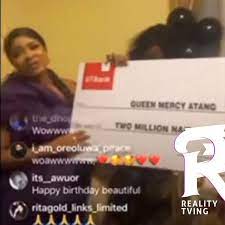 Queen was thrilled by the gesture of love from her fans who visited in numbers.

She is a philanthropist, aspiring politician and Big Brother Naija season 6 housemate.

The reality star is not the only child in her family. She has three other beautiful siblings and was raised by a single mother.

According to Queen, being raised by her mother alone taught her many life lessons which she is grateful for. 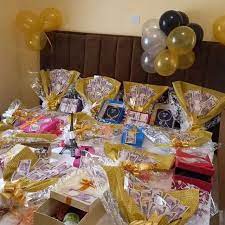 Queen asserted that she considers herself a true leader and an excellent communicator who is very calculating, loyal, and peaceful.

TheNewsGuru.com (TNG) gathered that the reality star plans to open her own business and become a female politician.

She has earned some wealth for herself through her career and business.

Since her unveiling as one of the BBNaija housemates, Queen’s social media pages have increased in a number of likes and follows.