by Olaotan Falade
in News, Politics
Reading Time: 5 mins read
A A
0 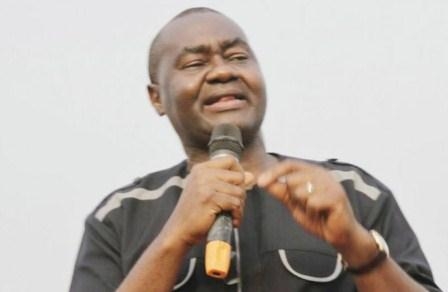 …Vows not to benefit personally from cleanup project

Senator Magnus Ngei Abe, the All Progressives Congress (APC) candidate for Rivers South East Senatorial District in the legislative re-run elections, has said that the Ogoni people are more united than ever behind him.

Speaking at a media chat with newsmen in Port Harcourt, Abe said the Ogoni repose implicit confidence in him as their candidate that will deliver their expectations through the instrumentality of the Senate.

2023: Abe is the next Gov of Rivers State – SDP National Chairman

“I am surprised to hear this. I have been in politics close to 20 years; I have actually never seen the Ogoni people united than they are now. So, when you say divide, I don’t know how this election has divided the people of Ogoni. I would rather say that this election has united the people of Ogoni in a way that they have never been united before in recent times. When you say people are divided, you presupposes that there is some measure of equality in the division. That will amount to a division. But when more than 90 percent of the people are saying something, that to me is not a division. There are people who are being paid where they are and they have an obligation to say certain things. And we all recognise that they are saying that because they don’t have a choice. They have to say that. How would you gauge the opinion of a people is by listening to those voices that have no obligation to say one thing or the other. I, as a member of APC, I have an obligation to defend my party and so also do the PDP members from Ogoni. But you need to hear the non politicians who have no stake one way or the other. It is from their opinion that you will know if Ogoni is divided. I would say rather that I have never seen the Ogoni people more united behind an idea. I have never seen the Ogoni people more united about their determination to elect somebody of their own choice to represent them this time around”.

Senator Abe said he was overwhelmed by the expression of love, support and encouragement by the ordinary Ogoni people anywhere he went to in course of the rally.

He gave an instance where he privately went on a jogging just to keep fit in Gokana Local Government Area and on sighting him, the people trooped out from all surrounding villages and turned that private exercise to a huge rally.

“My scholarship scheme, which I introduced the last time is one of the reasons why several people including members of the PDP today are working for me and decamping in droves because they were in their houses and their children came to tell them that Senator Abe was paying their fees and they don’t know Senator Abe, they are PDP members. Simply because we did it strictly on merit, those that won, won whether they were in APC or PDP. The water that we have in different communities around the place, people of all parties are drinking it. The light that we did, people from of all parties are benefiting from it. Everything that we have done have benefited the people of Nigeria who are in our district including non indigenes”.

On the Ogoni Cleanup, Senator Abe said the project was on course as the necessary structures had been put in place while the process of effective funding was being articulated, perfected and expected.

“Nobody can say not much has happened after the launch. A lot has happened. The board of trustees and governing council have been set up. Advert has been placed for the project manager. Thousands of people applied, their names screened. A committee was set up to look at the various aspects of the report and provide a frame work for the implementation of the report. The board of trustees has met. The governing council has also met and all these things are in place. The funds are being expected and the necessary framework for getting the funds and putting them into use are being done”.

Abe said he had been in touch with the various government agencies concerned with the UNEP report implementation on personal relationship, stressing that if elected he would then fast track the project on official basis as the representative of his people.

“If by the grace of God, I am elected, which is clear to everybody who has been studying the political landscape that I will be next Saturday, part of what I will be able to do is that at that point I now have an official basis to interact with those who are doing this thing as the Senator representing the area. It is no longer Magnus Abe leveraging on personal relationship that I have built in the course of my career to be able to talk to people, I am now talking officially on behalf of the people. I can ask question officially on their behalf. I think that that will make a very big difference as far as the implementation of this report is concern”.

He noted that he (Abe) was doing that in the interest of his marginalized people, pointing out that when he was not given the gubernatorial mandate for the state that he chose to present the UNEP report for the interest of his people than other monetary gains.

He stated that he had vowed that he would not personally benefit from the Ogoni clean up as a sacrifice for his people and to enable him be vocal and straight forward in cause of the project implementation.

“I want to put it on record that I am the only politician from Ogoni that have promised privately or publicly that I will not benefit personally from the implementation of the report. I am not going to ask Mr B to take something and turn around in the night and go and collect. People who know me, know that I am a man of my words and what I have said is what I will do. So, I want to keep myself above board because if I have nothing to gain, then I can tell everybody the truth and I believe that that is the kind of messenger that the Ogoni people want to send on an errand at this time”.

The former Secretary to Rivers State Government took a swipe on a statement credited to Gov. Nyesom Wike where he said that Olaka Nwogu was his boy he could send on errands, stating that he himself was different as only his people could send him on an errand.

“Gov. Wike said that Olaka Nwogu is his boy. He is somebody that he can send a message and he will just go but that is not the kind of representative that our people want. He should go and say that to the person who will represent him in his own district. In our own district, the people want to choose who they would send. They want to choose the message that they will give to me. They don’t want Wike to give me a message to go and carry on their behalf. That is not democracy. So, I think it is very important to my people and to the people of Rivers South East Senatorial District that I am elected because I will carry their message and not the message of any external power”.

Senator Abe said he and his party are concerned about peaceful election in the state unlike Gov. Wike and the PDP, and to this end will respond not fire for fire but water for fire in the interest of the state.

“I don’t believe in the principle of fire- for-fire. Those who are old know fire don’t put out fire. What puts out fire is water. So, I have always believed in water-for-fire. I think that what we need to do is to tell the people who are bringing fire that fire will not solve the problems of our society and two years of fire has clearly not solved the problems of our society. What we need now is how to put out all the fire that are being ignited all over the place and the kind of water that will do it is that the federal government that has the responsibility of securing the lives of Nigerians should provide adequate security for the people of Rivers State so that they can come out and cast their votes in an atmosphere that is devoid of violence”.