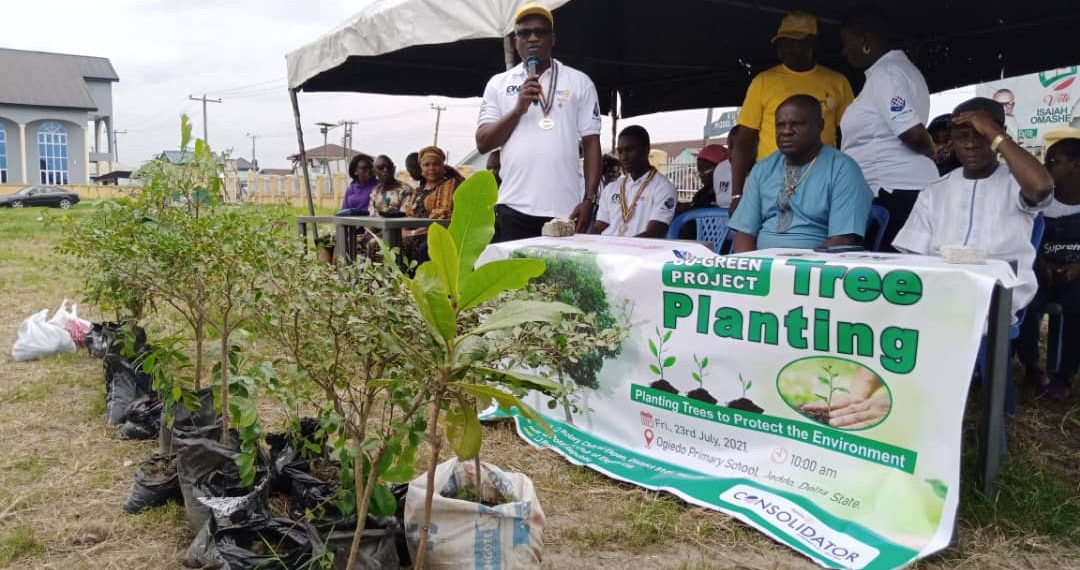 Rotary International, an international service organization, has launched a campaign of tree planting in communities of Delta State.

TheNewsGuru.com (TNG) reports the campaign was flagged off by the Rotary Club of Ekpan, District 9141, on Friday in Jeddo, Okpe local government area of the State.

The campaign as part of its community service projects for the year 2021 to 2022 started with the planting of twenty-five (25) trees of different species, and donation of two (2) waste collection drums at Ogiendo Primary School, Jeddo.

Insecurity: Jeddo, Delta community cries out for help, calls on govt to intervene

No mosque was burnt in Jeddo, Delta community – Police

The project which was tagged, “GO-GREEN Project” and aimed at beautification and conservation of the environment, was carried out in collaboration with Rotaract Club of Ekpan CB, and Reggae Republic, the One Million Reggae Tree campaigner.

Present during the launch of the campaign are the President of the Rotary Club of Ekpan, Rotn. David Ojegba, Hon. Benson Umukoro, the supervising counsellor for environment in Okpe local government council and Mr. George Owarume, the Unuevworo of Jeddo community.

Others are representative of the Reggae Republic, Mr. Uba Chukwuemeke Washington and the Headmaster of Ogiendo Primary School, Prince Fidelis Mebitaghan.

While addressing the project participants and dignitaries who were present, Rotn. Ojegba said planting of trees to protect and conserve the environment is one of the seven areas of focus of Rotary International (Protecting the Environment).

He said that it became important for the club to embark on the project in order to protect the school environment from the effects of erosion, provide shade for pupils, and to also ensure proper collection and disposal of waste papers which are frequently generated in the school.

Meanwhile, the representative of the Reggae Republic, Mr Washington also spoke on the importance of the project and the need to plant trees in the surroundings.

He stressed that human life cannot exist where there are no trees, since the oxygen used by humans comes from trees.

He noted that the world is currently facing the challenge of climate change, and that it was necessary to plant trees in the environment, as one of the ways of addressing such environmental problems.

He also added that the presence of trees protects the top soil from adverse effects of erosion.

Expressing appreciation for the project, Prince Mebitaghan thanked the Club and collaborators.

He said that the management and staff of the school were very grateful to the Club for choosing Ogiendo Primary School for the laudable project.

He said the school would educate the pupils on the importance of having trees in the environment, and also encourage them to plant trees in their surroundings at home.

Urging Rotary International to do more good for the school and humanity, the headmaster assured that the school would do everything necessary to nurture the trees which have been planted.

In his appreciation to the Club for the project, Hon. Umukoro said he was aware of various projects the Club has been doing in several communities, and wondered the lack of presence in the community.

He thanked the Club President for the plans by Rotary Club of Ekpan to charter a club in the community.

He said a club like Rotary Club, which embarks on community service projects that are aimed at helping humanity would be very much welcomed in the community, and that he would give his maximum support to the club if chartered in the community.

While thanking the Club and collaborators for the project, the Unuevworo of Jeddo community, Mr George recalled that in his days as pupil of Ogiendo Primary School, there were several trees in the school environment.

He said “over the years, the trees are no longer there” and that the importance of planting trees in the environment cannot be overemphasized.

He noted that Jeddo community was very much in support of the project, and urged the Club to embark on more such projects, and plant more trees in the community.

TNG reports Rotary International is an international organization established 1905, and made up of clubs across the world with over 1.2 million people who are passionate about doing good to help the society.