Senate pledges to work with executive in nation’s interest 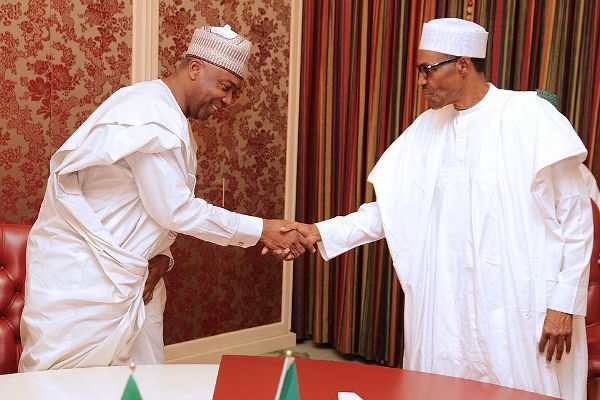 Senate President Bukola Saraki has assured the leadership of theAll Progressives Congress ( APC) of good cordial working relationship between the Senate and the Presidency.

He gave the assurance on Wednesday in Abuja when he led a Senate delegation on a visit to the APC National Chairman, Chief John Odigie-Oyegun and members of its National Working Committee (NWC).

It would be recalled that the relationship between the Senate and the Presidency had not been very cordial in the last few months.

“We both bored our minds, we told ourselves the hard truth and at the end of the day, we accepted that certain things were not done.

“But we accepted to move forward and work with the party in the interest of building the party because of Nigerians that believe in us.

“We need to work closely and we are hopeful that a new chapter is being opened today in the interest of the party and Nigerians,’’ Saraki said.

Saraki was accompanied on the visit by the Senate Leader, Ali Ndume, his deputy Bala Ibn Na’Allah and the Chief Whip, Prof. Olusola Adeyeye among others.

He pledged loyalty to the Chief John Odigie-Oyegun -led NWC of the APC, saying that his team was at the party to “listen” to its leadership.

He also said that he was at the service of the party and Nigerians at all times.

Earlier, the APC national chairman assured that the party was doing everything possible to address the sufferings of Nigerians in the face of the current economy hardship.

“We want to assure the general public that they will see results that will lift their spirit in the next few weeks.

He described the meeting with the Senate President as “very rewarding’’ and commended the entire National Assembly for its cordial relationship with the executive so far.

He added that the meeting was to discuss ‘House-Keeping’ issues.

According to Odigie-Oyegun, the meeting is an opportunity to draw up a new basis of cooperation between the party, its members in the Senate and the executive.

“Look at the party and look at the way we all interact among ourselves and the governed and it is my hope that this will be the very best of this high level interaction.

“We will at the very end of it all, present to the Nigerian public, a government, a party and a National Assembly that are working all in the same direction,’’ Odigie-Oyegun said.

He stressed that the party leadership was making efforts to resolve the alleged issues between the Presidency and the National Assembly.

“We have started the process, but there are issues to be resolved, we accept that things have gone wrong and we are determined to right those wrongs,’’ the APC national chairman said.

He said though the meeting was late in coming, it was better late than never as it would afford the two sides the opportunity of discussing issues affecting the party and the country.