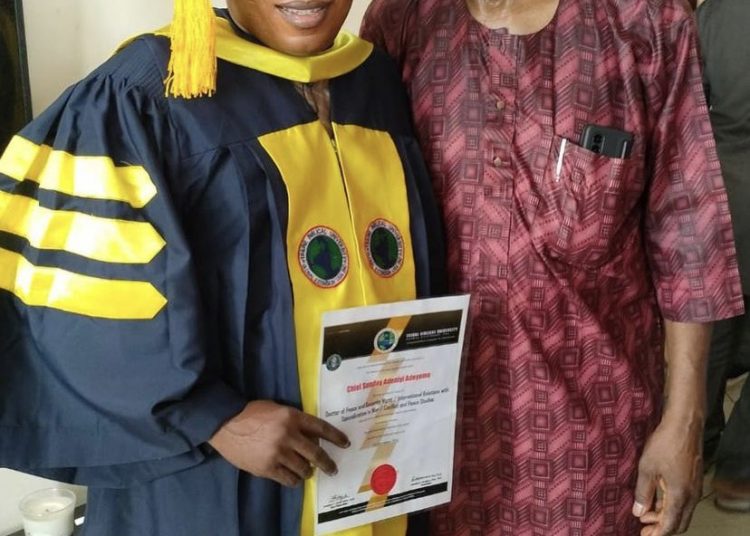 The doctorate degree is said to be in Peace and Security Management/International Relations from the Triune Biblical University, USA.

The trending Photo of the leader of Yoruba Nation agitators, Sunday sees him in an academic gown, flanked by people who appear to be of Yoruba origin.

I’ll be back soon to achieve Yoruba nation – Igboho

He looked all smiles while holding on to his certificate and posing for the cameras.

It will be recalled that in July 2021, the Department of State Services launched a manhunt for Igboho, who had demanded independence for the Yoruba people.

TheNewsGuru.com (TNG) reports that Igboho, nicknamed after his hometown, rose to fame following his role in the Modakeke-Ife communal crisis in 1997, where he played an active part.

He is the chairman of Adeson International Business Concept Ltd. His chieftaincy title, Akoni Oodua of Yorubaland, has become famous in recent years. 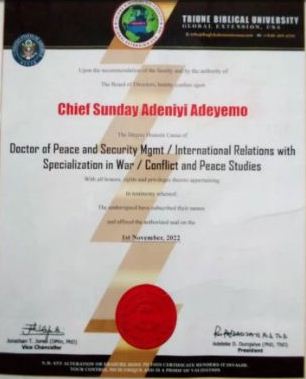 He gained social media attention in January 2021 when he gave an ultimatum to Fulani herdsmen in Ibarapa to vacate the land after the killing of Dr. Aborode and enforced the same.

He is currently agitating for the freedom of the South West.

Igboho was born in Igboho, an old Oyo town, of Oke ogun in Oyo State. His father relocated the family to Modakeke in Osun state, where he grew up.

The Yoruba Nation agitator started off as a motorcycle repairer and then ventured into automobiles where he sells cars and was able to start his current Adeson business.

He gained international attention after the part he played in the Modakeke/Ife war between 1997 and 1998, where he was a defendant of the Modakeke people. And thereafter relocated to Ibadan where he met former Oyo state Governor, Lam Adesina through a courageous step while trying to defend the rights of the people at a fuel station.

He also went on to work with former Governor, Rasheed Ladoja and became one of his most trusted aides.

As the Akoni Oodua of Yorubaland, he is known for fighting for the rights of the Yorubas and advocating for the Oduduwa republic.