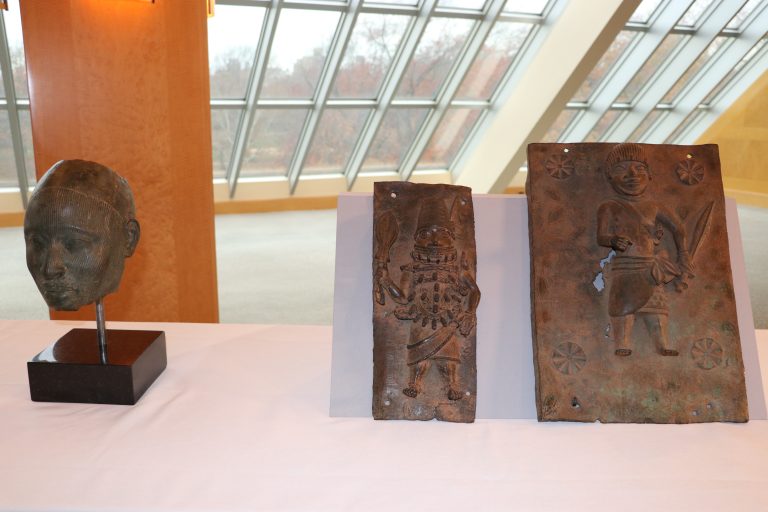 The Consulate-General of Nigeria in New York has taken custody of three Benin and Ife artefacts from the Metropolitan Museum of Art (MET) in New York.

The Director-General, National Commission for Museums and Monuments (NCMM), Prof. Abba Tijjani, received the artefacts from the museum in company of the Consul-General of Nigeria in New York, Amb. Lot Egopija.

The MET currently houses about 160 works of arts from Nigeria, which were mostly donated by individuals who were said to have acquired them in the art market.

Tijjani, who later signed a Memorandum of Understanding (MoU) with MET, commended the museum for returning the artefacts to Nigeria, urging other museums in possession of Nigerian artefacts to follow its exemplary gesture.

The director-general said the issue of repatriation was now at the heart of the people looking at museums particularly in Europe that these artefacts were not their own yet they displayed them.

“So, we are looking forward to collaborating with MET now that we are friends and we understand each other and we want to see how we can work together,’’ he said.

“We have about 52 museums across the country under the commission, and we have 65 monuments and sites and staff working in the museums will require modern training.’’

Similarly, Tijjani called for collaboration between MET and NCMM on exhibition, scholarship and capacity building of the staff and getting the required curators

Noting that exhibition is key to reaching out to the public, he said “Nigeria is very passionate about the way it exhibits its artefacts and we feel that it will be good if we collaborate and rob minds when it comes to joint exhibitions.

“There is a need for us to exhibit our works in a way that we understand it and we want people to understand these artefacts too,’’ he said.

The director-general said he was looking forward to signing Memorandum of Understanding (MoU) with MET in those areas and other areas of mutual areas.

“We have we had long lasting relationships, the museum is committed to a responsible process in collaborating in areas of standards as well as to study works that have been in our collection.

“It’s an ongoing effort to learn to exchange and to find the right solutions,’’ he said.

Hollein said MET would be pleased to initiate the return of Nigeria’s works and remain “committed to transparency and the responsible collecting of cultural property”.

He said the signing of the MoU was a meaningful way to show dedication of MET with NCMM, adding the possibility to exchange more on different levels on scholarship, exhibitions and other ideas that we might have together.

“We at the MET are so pleased to establishing the framework of exchange with Nigeria and we are looking forward to collaborating together,’’ Hollein said.

The two 16th-century Benin brass plaques and the 14th-century Ife brass head were later taken to the Consulate-General of Nigeria in New York for eventual return to Nigeria at a later date.