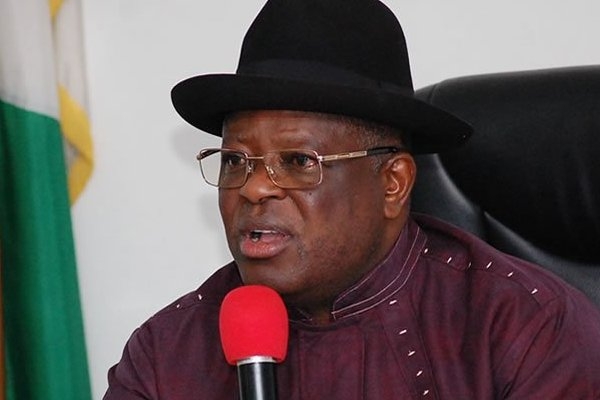 Governor David Umahi of Ebonyi State has expressed worry over the proliferation of small arms and ammunitions in the country.

The Governor expressed the worry while receiving the Director General of the National Task force/National Commission on Proliferation of Small Arms and Ammunitions, Baba Muhammed, and his team in Abakaliki, Monday.

The Governor commended President Muhammadu Buhari and members of the National Assembly for their wisdom in setting up the taskforce.

He further thanked the Director General of the Commission for his patriotic disposition in the discharge of his mandate and enjoined other Leaders of the Nation to always adhere to Federal character principle in their service to the nation.

The Governor said: “I commend the President, National Assembly people for the Initiative.

“The level of arms in the society is so terrible.

“I think you would also turn your eyes to the borders and then these locally manufactured weapons.

So, this will work and it will be very helpful.”

Governor Umahi further advocated for the reinvigoration of the federal character principle in allocation of positions in the country, adding that such would help reduce tension and agitations.

“I will continue to say that we have Federal character and nobody should shy away from saying that.

“Those who intentionally exclude South East from the affairs of the Nation should remember that it must not end the way they wish it.

“We should try to be fair in this Country if we say that we are brothers and sisters.

Governor Umahi, during the event, also set up a 10-man Committee to work with the National Taskforce/ Commission in the State to facilitate the enlistment of over 4,000 Ebonyians.

The Taskforce team is made up of the Deputy Governor, Dr Kelechi Igwe; Secretary to the State Government, Dr. Kenneth Ugbala; the State Attorney General and Commissioner for Justice, Chief Cletus Ofoke; the Head of service, Dr. Rita Okoro; the Special Assistant to the Governor on Media and Strategy, Chief Chooks Oko, and the Special Assistant to the Governor on Internal Security, Mr. Panchris Eze.

Others are the Principal Secretary, Chief Emmanuel Obasi and Commissioner for Trade and Investment, Barrister Chioma Nweze.

Earlier, the Leader of the delegation, Dr. Baba Muhammed said they were in the State to appreciate the Governor for his assistance to the Commission including the provision of Office accommodation, and to intimate him on other programmes of the Commission.

He announced the designation of Ebonyi State as the Headquarters for Zone 12 of the Commission in its task of mopping up firearms and Ammunitions in the hands of unauthorized persons.

The Governor was joined in receiving the Commission by Deputy Governor, Dr Kelechi Igwe and members of the State Executive Council.

BBNaija: Why I nominated Daniella for eviction - Eloswag