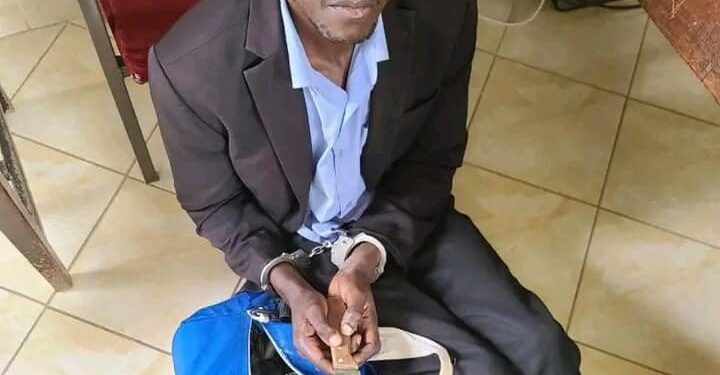 In what many will consider unbelievable, an 8-year-old boy has been kidnapped by his own stepfather.

However, the boy, who was kidnapped by his stepfather has been rescued by detectives in Kenya and reunited with his distraught mother.

The suspect, Nemwel Ondari, kidnapped the boy on Saturday morning, November 12, after a domestic disagreement with his wife, Everline Nandera.

The suspect was arrested following a report filed at Embakasi police station at around 9:30am, by the boy’s worried mother.

According to a statement issued by the Directorate of Criminal Investigations- DCI, the suspect demanded and threatened to kill the boy with a kitchen knife if the wife didn’t act fast.

“Nandera told detectives that she had left their home in Embakasi’s Tel Aviv area at the crack of dawn, headed for Muthurwa market,” the statement read.

But upon coming back at around 9:20am, she found her husband and son missing. A note had been left behind by the husband Nemwel Ondari, 32, demanding for a ransom of Sh50,000, for the release of the boy.

In the note, the man also warned his wife that he would kill the boy using a kitchen knife which he had carried, should she try any monkey business.

Immediately the woman filled her report at Embakasi police station, detectives from the elite Crime Research and Intelligence Bureau (CRIB) based at DCI Nairobi area were assembled and a manhunt for the suspect was launched.

The detectives assisted by their Embakasi counterparts traced the suspect and arrested him at the NMS Green Park matatu terminus off Haile Sellasie avenue, a few hours later.

The detectives established that the couple had a heated argument last night and after Everline left early in the morning for Muthurwa to fend for her family, the man packed his clothes and a kitchen knife in two bags, before taking off with the boy.

The detectives pounced on the man at around 4pm, as he eagerly waited for the ransom to be deposited into his Mpesa account.

Mother and child were reunited and the man was escorted to Embakasi police station, where he is cooling his heels awaiting arraignment.