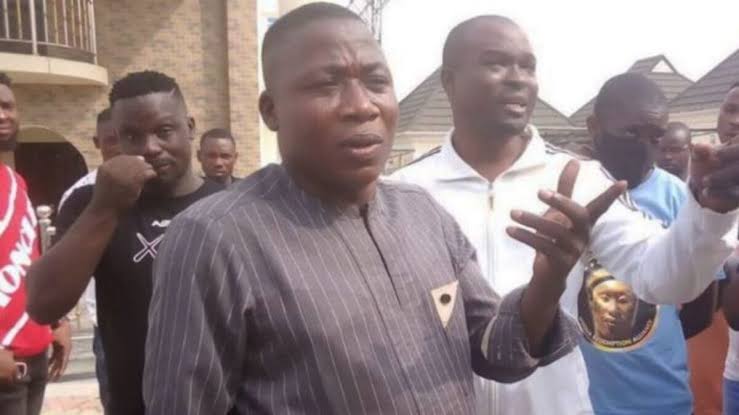 Sunday Adeyemo, popularly known as Sunday Igboho has opened up on what President Muhammadu Buhari should do to address the genesis of his agitation for a Yoruba Nation.

TheNewsGuru.com (TNG) reports Igboho made this known in his New Year message that was signed on his behalf by one of his lawyers, Pelumi Olajengbesi.

The Yoruba nation agitator asked the government of President Buhari to end the killings, kidnappings and sundry crimes in the South-West geopolitical zone in 2022.

Igboho, in his 2022 New Year Message, said everyone living in the country deserves to be protected regardless of their tribe, religion or political leanings.

The 49-year-old campaigner also said he was not at war with Buhari, the governors or any government official but lamented that the Buhari government has failed to address the security challenges in the South-West zone which was the genesis of his agitation for Yoruba Nation.

The message titled, ‘Sunday Igboho’s New Year message for 2022’, reads: “Let it be abundantly clear that I am not at war with President Buhari, the Governors or anybody in government.

“What I want the government to do is to address the genesis of my agitation for a Yoruba Nation.

“The genesis is the insecurity in Ibarapaland and other places in the entire Yorubaland where farmers were maimed, hacked to death, kidnapped and raped as if there are no security agents in the country. Everybody deserves to be protected and feel safe in their country regardless of their tribe, religion or political leanings.

“At some points our people became helpless and they can no longer go to their farmlands again. Scores of farmers were butchered to death in 2021 and the government pretends that all is okay. No, this must not continue and this was why I rose to stop the menace. I didn’t speak up to fight government, I spoke to ensure protection for our people.

“My message is that in 2022, the government should rise up and put an end to the havoc caused by herdsmen that are criminals and give everyone a sense of belonging – whether foreign or locals — and stop the attack of our people in Yorubaland.

“I am not selfish about myself, I am more concerned about helpless citizens who buried their loved ones to aimless killings in 2021 and I pray the Almighty God would stop the killings of innocent people in Nigeria”.

Igboho has been in detention in neighbouring Benin Republic since his arrest around 8 pm on July 19, 2021 at the Cadjèhoun Airport in Cotonou.

The Interpol at the airport had arrested the agitator and his German-citizen wife, Ropo, at the behest of the Nigerian Government.

The Beninise Government subsequently arraigned the agitator before the Cour De’appal De Cotonou on migration-related offences and for gunrunning but the court on July 27, 2021, ordered that Ropo be released while Igboho be remanded in prison till further notice.

The Department of State Services had on July 1, 2021 stormed the Ibadan residence of Igboho in a Gestapo style, killing two of his associates and arresting 12 others. The luxury cars and the house of the agitator in the Soka area of Oyo State were also riddled with bullets.

The DSS subsequently declared Igboho wanted for allegedly stockpiling arms to destabilise Nigeria under the pretext of secessionist agitation, an allegation he had since denied.

After about three weeks underground, Igboho found his way to Cotonou and planned to escape to Germany through an Air France Cotonou-Paris-Hamburg flight but the trip was botched as the Interpol at the airport arrested him and wife.

Political solutions to resolve the matter had not achieved any tangible result.