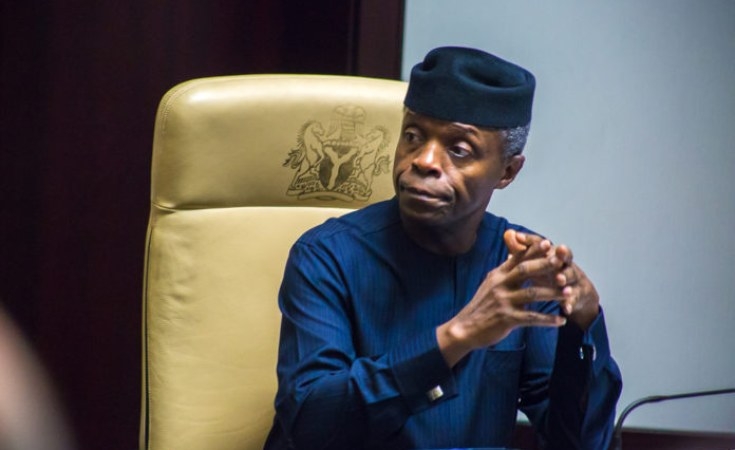 Vice- President Yemi Osinbajo has said that the late Soun of Ogbomoso, Oba Jimoh Oyewumi, bagged two national honours during his lifetime due to his remarkable contributions to Ogbomoso and Nigeria at large.

Osinbajo stated this during a thanksgiving service held in honour of the late traditional ruler at First Baptist Church, Ogbomoso on Sunday.

The News Agency of Nigeria (NAN) recalls that the late Oba Oyewunmi, who was the 20th Soun of Ogbomoso, joined his ancestors on Dec. 12, 2021 at the age of 95.

The vice-president said that the conferment of Commander of the Order of the Niger (CON) and Commander of the Federal Republic (CFR) on the traditional ruler at different times was in recognition of his remarkable contributions to Ogbomoso and Nigeria.

“Having ascended the throne on the Oct. 24, 1973, he delivered four decades and eight years of exceptional and transformational leadership, leaving behind the indelible marks of peace and prosperity.

“It is because he was not just there; he made remarkable contributions to Ogbomoso and Nigeria, for which the nation honoured him twice, first as CON and then as CFR,” he said.

Osinbajo described the late Oba Oyewumi as a thoroughbred leader who dedicated himself to the people of Ogbomoso, for both their social and human capital development.

He further explained how the traditional ruler transformed the ancient town from having three schools upon ascension to the throne in 1973 to more than 150, 40 years after.

Osinbajo also added how the deceased had to terminate his schooling after the passing of his father, moving along to the business of trading.

“When he ascended the throne of his forefathers in 1973, there were only three schools in Ogbomoso. Indeed, he himself did not have it all smooth sailing with education.

“He went after this educational goal so much so that after his 40 years on the throne, the town could count, at least, 150 secondary schools.

“His time certainly brought commendable development to this great and ancient town of Yorubaland. So we can say confidently that the scriptures are fulfilled today,” he said.

Osinbajo said that the late Soun lobbied extensively and enthusiastically to clinch a university of technology for Ogbomoso and it’s taken over fully by Oyo State Government recently.

According to him, the royal father’s desire was not for money but that the people of the town and the state would be educated.

He said that the late Oyewumi worked assiduously to ensure the establishment of law courts, area police command and a station of the then National Electricity Power Authority (NEPA) station in Ogbomoso.

The vice president said that there were so many examples of his efforts to develop the town, recalling how he became the wealthiest African in Jos, as an honest trader.

“It is worthy of note that upon his ascension to the throne of his forefathers, he became the first Soun of Ogbomoso land to wear the beaded crown.

“While he lived in the North, he won the respect of all, including the Sardauna of Sokoto who nicknamed him Ciroma.

“Without any doubt, the Oba’s passing has created a big vacuum among the league of traditional rulers in Nigeria, and this is not just because of his age and almost half a century on the throne,” he said.