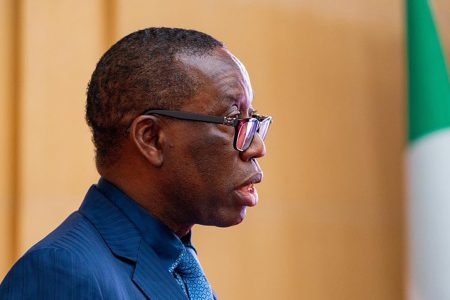 TheNewsGuru.com reports that Chief Tom Ikimi, the Chairman of the Committee on Thursday in Abuja revealed the reason for Okowa’s selection.

Ikimi said that the job of the committee was to screen the nominees for a running mate to ensure that the party did not run into any problem.

“Okowa has served in many capacities in the public service of Delta State as well as local governments council of that state.

“He also served as an honourable commissioner at one time in that state and in fact, he served as the senator representing one of the senatorial districts of the state.

“The business of this committee was to ensure that he has the right qualifications because we are not interested in going to court after the election as people will be challenging those who are qualified or those not qualified.

“The committee found out that he is fully qualified. He is healthy, cool-headed, and willing to embrace all others who got tested over this position with him so that we have peace and stability in the party,” Ikimi said.

Members of the committee as constituted by the party included Akilu Indabawa, who served as Secretary, and Mr. Sunday Omobo as Administrative Secretary.

2023: Ohaneze attacks PDP over Okowa, says Igbos will not vote for them

2023: Ohaneze attacks PDP over Okowa, says Igbos will not vote for them