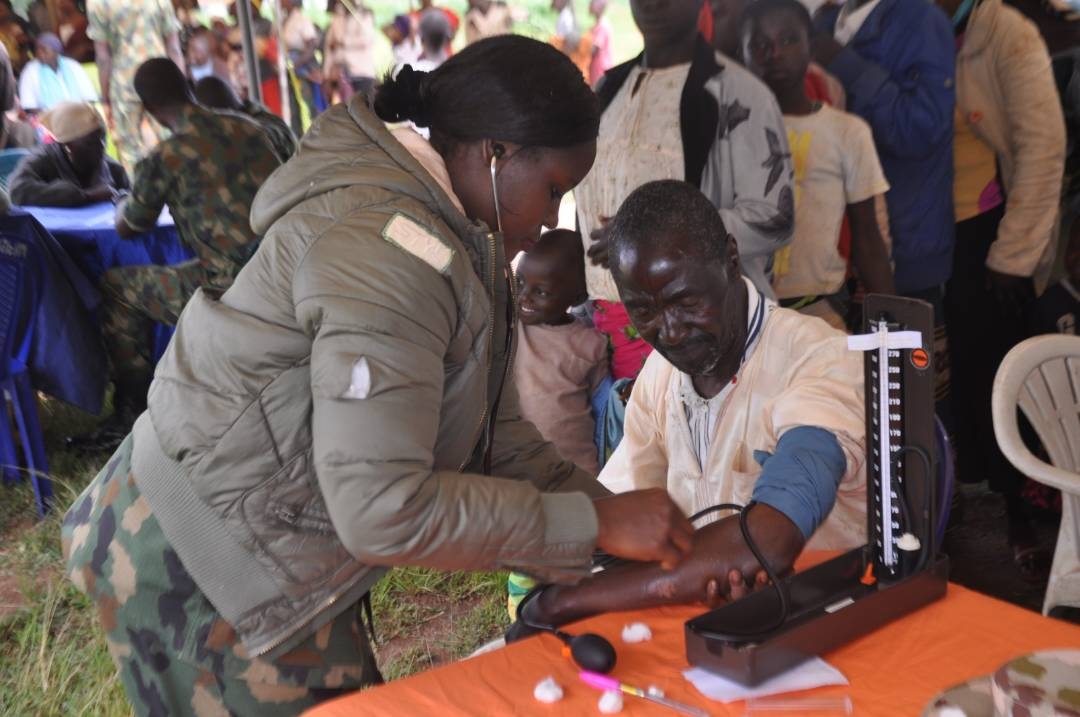 The Nigerian Air Force (NAF) says it has begun a five-day medical outreach for nearly 4,000 Internally Displaced Persons (IDPs) in Bayelsa.
Air Commodore Ibikunle Daramola, NAF Director of Public Relations and Information, made this known in a statement on Friday in Abuja.
Daramola said the medical intervention holding at Igbogene Community in Yenagoa Local Government Area was an initiative of the Chief of Air Staff (CAS), Air Marshal Sadique Abubakar.
He said that Abubakar had directed the NAF Medical Services unit to take necessary steps toward ameliorating the suffering of the victims of the flood disaster.
The director quoted Abubakar as saying that NAF would always be ready to deploy its resources in alleviating the hardship faced by Nigerians.
CAS urged the IDPs to take advantage of the high quality and free medical services that would be provided for them, saying that eye surgeries would be carried out at the NAF Medical Centre in Yenagoa.
The director said that the chief of air staff was represented at the opening ceremony by the Air Officer Commanding Mobility Command (AOC MC), AVM Napoleon Bali.
He said that some of the beneficiaries of the outreach,which also had officials from the Bayelsa State Emergency Management Agency, State Ministry of Health and Nigerian Red Cross Society who were in attendance, expressed appreciation to the NAF for coming to their aid.
He said that the medical outreach would also cater for the medical needs of women, children and the aged affected by flooding.
Daramola said that services that would be provided during the five- day medical outreach include free medical consultations and drugs, laboratory investigations, prescription eyeglasses, and treated mosquito nets.
The NAF spokesman said that there would also be general and eye surgeries for those with conditions requiring minor surgical interventions.
He said that the outreach was part of the NAF’s humanitarian efforts geared toward alleviating the suffering of the victims of the recent flood disaster caused by heavy rainfall in parts of the country.
Meanwhile, the NAF had recently conducted medical outreaches for flood victims at Zungeru in Wushishi Local Government Area of Niger and Jibia in Jibia Local Government Area of Katsina State, totalling 5,000 beneficiaries.

Melaye accuses Gov Bello of sending policemen to assassinate him