Home » Niger Delta » I stand with the governors of the South South, not Akpabio, on NDDC – Edwin Clark

I stand with the governors of the South South, not Akpabio, on NDDC – Edwin Clark 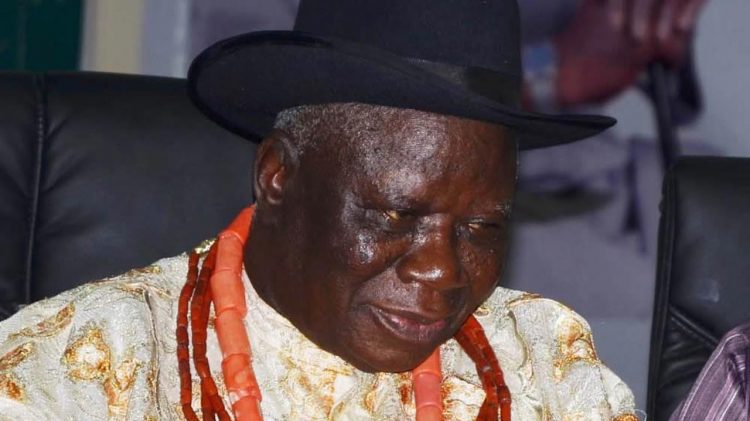 Elder statesman and prominent South South leader, Chief Edwin Clark has clarified that he does not support the strong grip of Senator Godswill Akpabio, the Minster of Niger Delta Affaris on the Niger Delta Development Commission (NDDC).

The outspoken former federal minister said rather, he stands with the governors of the South South states.

Clark made the clarification in a statement he personally signed and released on Tuesday night.

“My attention has been drawn to a publication/communique that is
trending on-line, allegedly stating that I am in support of the stronghold the Honourable Minister of Niger Delta Affairs, Chief Godswill Akpabio, has on the Niger Delta Development Commission (NDDC) and its finances, by a group that calls itself South-South Front (SSF) after a so called meeting where they said of me “The leaders were keen to applaud attitude the Ijaw National Leader, Chief Clark, has shown thus for as well as his support for the NDDC management.”

“I wish to disassociate myself from this group which I do not even know.
My position on the activities of Minister Akpabio, has been consistent,
and is in the public domain.

I am in support of a forensic audit to unravel the stinking corruption
in the Commission, but not the activities of Akpabio.

I recall that I made this known when the Sole Administrator, Effiong Okon Akwa, came to pay courtesy call on me soon after his appointment. I advised him to insulate himself from the Honourable
Minister and face the work he had been appointed to do. Also, just a few days ago, during the commissioning of a road project in my Community Kiagbodo, by the NDDC, in my address which was read by my son, Chief Ebikeme Clark, former Chairman of Burutu Local Government Council, and presently Special Adviser to the Governor of Delta State, I asked that the Honourable Minister should leave the
Commission to do its job.

The Federal Government is allocating huge sums of money to work roads such as the Abuja-Kaduna-Kano Road, the Lagos-Ibadan Expressway, etc, which they call legacy projects, leaving out the East-West Road, which as a matter of fact ought to be the first legacy project of the country, as it is, today, the major haul through which the product sustaining the economy of the Country is transported to various parts of the country.

For the avoidance of doubt, I reproduce my address delivered at the
Road Commissioning at my hometown Kiagbodo:
“SPEECH BY CHIEF (DR.) EDWIN KIAGBODO CLARK, OFR, CON, AT THE
COMISSIONING OF THE CHIEF AMBAKEDEREMO ROAD, KIAGBODO TOWN, DELTA STATE, CONSTRUCTED BY THE NIGER DELTA DEVELOPMENT
COMMISSION (NDDC).

Let me begin by welcoming you all, especially, the Acting Managing Director,
Effiong Okon Akwa, and the leadership of the NDDC, to my hometown, Kiagbodo,
which has many unique features. We have the spectacular records of being one
of the main towns in the whole of Nigeria, where two major ethnic groups, Ijaw
and Urhobo, exist together, and in all our dear community is sufficiently
bilingual. Beyond that, we all have either maternal or paternal links with both
groups. This is why here in Kiagbodo, we live in the best fraternity and do all
things in common. It is our prayer that one day, all of Nigeria will be like our
town, living in a united country where the citizens live together, where everyone
is equal, and can aspire to any position.
Your visit here today, which is preceded by the Flag-off of donation of Education/
Essential Science Equipment in Warri, is part of the very remarkable
achievement, which you have recorded on your short period as Acting Managing
Director of the Commission. This is very much appreciated. You are a shining light
here in the Niger Delta and continue to contribute tremendously to the political
and social evolution of our people and the existing peace in the area.

Let me also welcome other dignitaries here present, some of whom are illustrious
sons and daughters of this community, Kiagbodo, especially, Prof. Victor
Peretomode, the immediate past Vice Chancellor of the Delta State University,
Abraka, Delta State, and who was a onetime Commissioner at the NDDC.
Today again, affords me the opportunity to say a few general things on the state
of affairs in the NDDC.

During your visit to me at my residence in Abuja, on your assumption of office, I
strongly advised that the construction of the East-West Road is a Federal
Government project, like every other Federal road projects such as the AbujaKaduna-Kano Road, the Lagos-Ibadan Expressway, etc, but which the Federal Government, through the Federal Ministry of Works and Housing, is funding
directly from accruals mostly gotten from oil (derived in the Niger Delta) revenue,, running into billions of naira, and which the Federal Government calls Legacy Projects. Is the Niger Delta region not qualified to have a Legacy Project?

A situation where the Federal Government spends so much on such roads, while
the East-West Road, running from Edo-Delta-Bayelsa-Rivers-Akwa Ibom and
Cross River States, is not funded by the Federal Government, and thus remains
deplorable, and has become death traps to users, and a waste of time and resources, as commuters go through the horrendous experience of travelling on
the road is quite unacceptable. For instance, the portion between Warri and
Benin, which ordinarily takes about 45 minutes to travel, now lasts for about 5
hours. I once again use this medium to call on the attention of the Federal Government to kindly look into the state of the East-West Road.

The Honourable Minister of Works and Housing, Babatunde Fashola, SAN, has been going round other parts of the country, to either commission the commencement of road projects, or inspect the conditions of roads. He is yet to be seen in the Niger Delta.

I challenge the Honourable Minister to mention the roads the Federal Government has constructed in the Niger Delta, particularly in Delta State.

I also wish to use this medium to once again, call on the Honourable Minister of
Niger Delta Affairs, Chief Godswill Akpabio, not to use the meagre resources of the Ministry meant to develop the Niger Delta region, to work the East-West
Road, which is obviously a Federal Government project. There are several areas in the region, which needs to be developed with the resources of the Ministry.

In addition, Acting Managing Director, recall that when you came to visit me, I
also advised you to detach yourself from the raging politics and as a professional,
focus on the job ahead of you. By that I mean, for you to stay away from the
continued feud between the Minister of Niger Delta Affairs and the Governors of
the nine Niger Delta States over the control of the Commission’s day to day
administration.

Furthermore, is the state of malfeasance and crass corruption for which the NDDC has become known. I was not, therefore, surprised when some of the elements within your system recently came up with a 15-page advertisement and contracts, which I will advise that you do not allow yourself to be lured by some officials of the Commission, to embark upon. I hear that you rejected them and has almost brought these practices to a stop. I am mentioning this because I know that the people behind these activities are entrenched in the system and will definitely try to undermine your efforts.

We will keep watching out for those who are bent on truncating and sabotaging
the efforts we have made in the past to set up machineries for the development
of our Niger Delta region. I recall how the eminent late HRH Pere (Dr.) Harold Dappa-Biriye as the leader of the region, and I as the Deputy, worked towards
the establishment of the Commission. The number of times we met with the then
President of the country, Chief Olusegun Obasanjo, and the number of times we
had to go and lobby with our Northern friends, before the Commission was
established. We had hoped that the Commission will be the guiding light for the social and economic development of the region. Today a few individuals, some
of them, pitiably and unfortunately, sons of the region, are doing everything to
derail the Commission.
As you commission this Bekederemo Road, Kiagbodo, today, I want to assure you that we the communities of Kiagbodo, and our neighbours, will ensure that we
play our part , that the road will be well protected for the good of the people.

This is what I hope many of the communities in the Niger Delta will learn to do whenever Government projects are sited around them.

As I conclude, I will like to emphasise that no payments should be made to the so
called Emergency Contracts, a scheme which has already gulped billions of naira.
I do hope that these fraudulent ‘Emergency Contracts’ are brought before the on-going Forensic Audit.

I will also like to call on the Federal Government to ensure the sustainable
funding of the NDDC. It is of great concern that the Commission is still being
owed a lot of money. This is unlike similar bodies such as the recently set up
North East Development Commission which the Federal Government has
ensured full funding as and when due. A country where different standards exist
for similar organisations is not in our collective interest. This is more so when the NDDC is the body responsible for the development of where the wealth of the
country comes from.

On your part, I want to repeat the advice, which I gave to you when you came to
see me on your assumption of office and that is for you to remember that you will one day leave this office, and will be required to give account of your stewardship. You must, therefore, finish, strong and clean.

Let me once more thank you all and wish you the best.”

“I align myself with the call by the South-South Governors for Minister
Akpabio to stop his interference at the Commission. I wish to also state
that the forensic audit should be completed as soon as possible to
enable a substantive Board to be put in place, in line with the Act
setting up the Commission.”