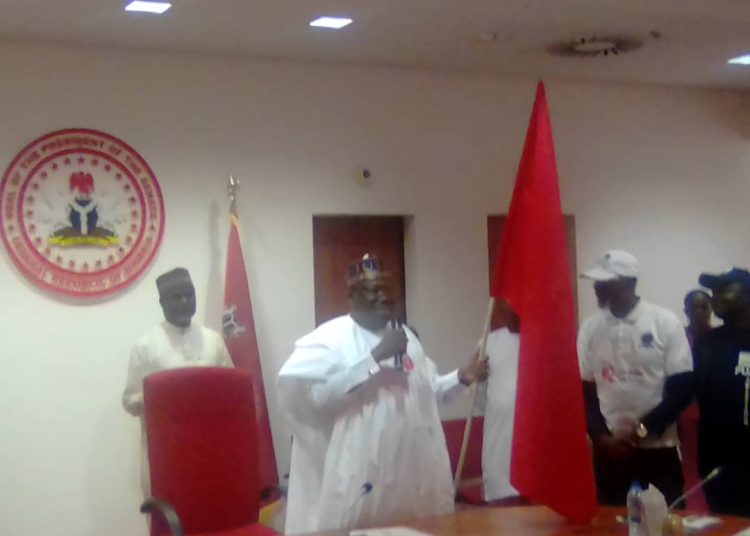 Lawan said this when he received members of an election observation group, Polling Unit Ambassadors of Nigerian (PUAN) on a sensitisation road walk at the National Assembly Complex in Abuja.

“I am waving this flag against voter inducement, so I call on all Nigerians especially the Youth to shun vote buying or selling their votes during election.

“It gives me the opportunity to take this red flag to show it to all potential vote buyers and sellers that vote buying is criminal and its punishable by the Electoral Act.

“Vote selling is also criminal and its punishable ,if you are a voter, keep your vote and decide who to vote for.
“When you vote,vote for someone or a political party that will make your life better. If you sell your vote, it’s equivalent to selling your freedom,” he said.

Lawan said that individuals who engaged in vote-trading stood the chance of being prosecuted, adding that security agencies across the country had been tasked to be vigilant to arrest and prosecute those who got involved in the act.

Dabas also urged voters not to sell their votes but vote for the candidate of their choice during the election.
He said that the group would closely monitor polling units to expose people engaged in vote buying in 2023 election.

Mr Osa Osaghe, the Secretary-General, Polling Unit Ambassador of Nigeria(PUAN), said that the group was worried about increasing vote trading and was committed to exposing the perpetrators for arrest and prosecution.

Osaghe said that the group also handed over of the red flag to INEC an indication that Nigerians were ready to put an end to vote-trading.

“This is a red flag that says no to vote-buying and vote selling on behalf of all Nigerians who are craving for vote credibility and wishing that in 2023 their votes will count.

“On behalf of Nigerians who are looking forward to a brighter future for our nation concerning our electoral process, we the members of PUAN are here today to present this red flag to INEC to say vote-buying for 2023 is a red flag,” he said.