Aisha celebrates as rumours of Buhari marrying another wife spread 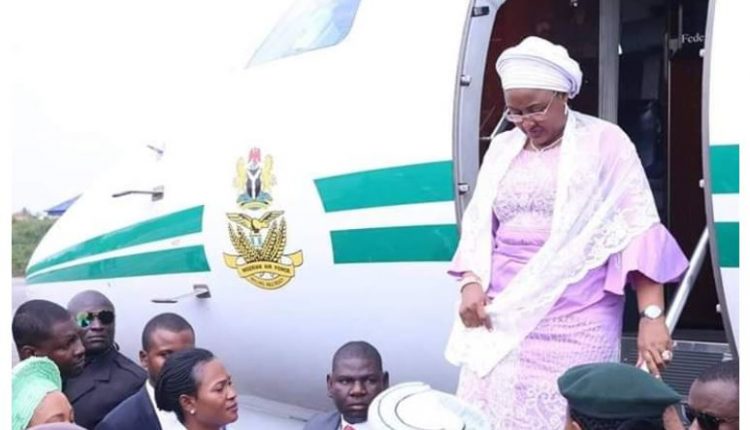 Nigeria’s First Lady Aisha Buhari on Friday joined millions of girls around the world to celebrate 2019’s international day of the girl child, even as rumours of President Muhammadu Buhari marrying another wife continues to spread across the nation.

TheNewsGuru (TNG) reports rumours emerged from the Aso Rock that Buhari will be getting married in a very quiet ceremony to Sadia Umar Farouq, the current Minister for Humanitarian Affairs Disaster Management on Friday.

This is following the continued absence of the current First Lady, Aisha who has been out of the Presidential Villa since her trip to Saudi Arabia and the United Kingdom (UK).

While sources at the Presidency has confirmed to DAILY POST that the news is fake, it has not stopped the rumours from spreading like wildfire.

Joining in talking about the rumours, Reno Omokri, former aide to ex-President Goodluck Jonathan believes that it could be true that Buhari is taking another wife to replace Aisha.

In a series of tweets, Omokri stated, “2nd wife? Could that be why she has been in England all this time? Apparently, the second wife story is true.

“What cant be confirmed is the date of the wedding fatiha. This man shouldn’t tempt his Creator. He just recovered from serious ill health and now he wants to add another yarinya! Second Term, Second Wife! Baba o!

“Apparently, @THISDAYLIVE broke the story this Sunday, but few noticed. I didn’t know he had stamina like this. And he even gave the new yarinya post! I hope I am invited to the wedding Fatiha. A man who just recovered. Pray we dont hear stories that touch!

“When he said he was “working hard”, we thought it was government work. We did not know it was, let us just say extra curricular activities. Ha! Hard worker! Baba I hail o. Remember what happened to your mentor, Abacha? We don’t want stories that touch

“Queen Esther wants to take the place of Queen Vashti! We just hope that the incoming wife will not do what PEPT could not do o! We did not know that this was what he meant when he said #NextLevel! We pray this ‘hard work’ will not end in a London clinic!

While First Lady Aisha did not touch on the rumours making the rounds in her statement to celebrate the 2019’s international day of the girl child, she expressed happiness in the progress being made in the area of activism by girls to protect their gender.

The statement reads: “Today, I join millions of girls around the world to celebrate this year’s international day of the girl child, the theme for this year is “GirlForce: Unscripted and Unstoppable”.

“I am happy to note the progress that has been made in the area of activism by girls to protect their gender. I want to state that more needs to be done especially to address gender based violence which seems to be more pronounced recently. All hands must be on deck to achieve this”.

Meanwhile, a source in the Presidency has confirmed to TNG under the condition of anonymity that President Buhari was not contracting any new marriage in whatever definition.

“It is fake news, ignore it. There is no wedding going on in Aso Villa, it is just one of the several mischievous schemes sponsored by Buhari’s critics who are trying to blackmail him because his wife is not in the country.

When TNG monitored the report on social media, we learnt that different hashtags for the purported wedding has been trending between number one to five on Twitter since Thursday.

#BUSA19, #BUSA2019, #TheWedding and Villa are some of the keywords that have been used loosely on Twitter to describe the purported wedding.

While the presidency is yet to officially address the issue, many Nigerians have since joined the conversation with most of them making fun of it.

Incredible! We heard d 1st lady Aisha Buhari is allegedly back, but Aso Rock cabals locked her up in her room despite over 200 soldiers & 200 police + plain clothes security personnel guarding the villa according to her. This comes as rumor has it that Buhari is taking a new wife pic.twitter.com/6eX5rfGtvj

#AISHA Buhari, the wife of General #Buhari, has been out of Nigeria for about two months now, following pressures from President Mohammadu Buhari to take Hajia Sadia Umar Farouq, the current Minister for Humanitarian Affairs and Disaster Management, as the second wife pic.twitter.com/a6DcFZvEiz

Buhari is marrying a second wife Hajia sadiya Umar Faruq Current minister of Humanitarian affairs.
It seems like a Rumor but i also read an article about it. pic.twitter.com/MdWFfIfYMF

I have just confirmed that President Buhari is truly wedding a second wife on Friday, after Jummah prayers at the Aso Villa Mosque. I have also confirmed that the madness worrying you guys is both generational and communicable. Someone has done 'soapy' all over your destinies!

Buhari’s new wife Sadia Umar Farouq, was hand picked & groomed by the cabal for the sole purpose of getting married to Bubu.

They said she replaced stubborn & exasperating Aisha, who does not respect Bubu’s culture & values nor his family. pic.twitter.com/u6Q2cvWwAg

Today is the day we all have been waiting for. So can the groom stand for recognition #TheWedding#BUSA2019#BUSA19 pic.twitter.com/T28gPInoPX

The GROOM is almost ready…we are putting final touches to his wedding dress!

So Pres.Buhari is getting married for the second time, and I am still single#BUSA2019 #BUSA19 pic.twitter.com/PytBK6TJlR Traffic: Google calls for more use of its map features