...says family aware of his presence 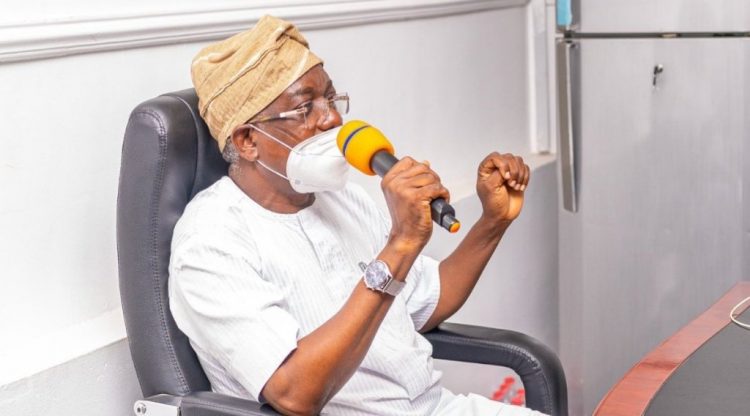 Oyo Deputy Governor, Rauf Olaniyan, has insisted that the family of the late Governor Abiola Ajimobi deliberately barred him and other state delegation from the 8th day Fidau prayers for the deceased.

He said the family was aware of his presence at the gate of the residence.

Though the Ajimobi family, on Saturday in a statement by Bolaji Tunji, had denied that Olaniyan was deliberately denied entry.

Tunji said the family was not aware of his planned visit and arrival at the gate.

He added that that on making efforts to facilitate access for him later, they discovered that he had left. The family offered apologies for the incident.

But in a statement by his Senior Special Assistant on Media, Omolere Omoetan, Olaniyan countered the explanation that the family was unaware he was waiting at the gate.

He said it was another act of rebuffing hands of fellowship being extended to the family of Ajimobi by Governor Seyi Makinde.

The statement reads in part: “Again, some members and aides of the former Oyo State Governor Abiola Ajimobi continue to rebuff the hand of fellowship extended to the family of the late governor by the government of Oyo State led by His Excellency, Engr. Seyi Makinde.

“Today at the 8th day Fidau Prayers of the former Governor Oyo State Isaika Ajimobi, the Deputy Governor, Engr Rauf Olaniyan, was denied access to the venue of the event.

“The Deputy Governor, who led the government delegation comprising himself and some commissioners, on the approval of the governor, was kept waiting at the gate for over 15 minutes. Even when security men at the gate went in to tell them he was at the gate, no directive came back to grant his Excellency access.

“At a point, the security personnel in uniform and mufti at the gates became very hostile and the ADC to the Deputy Governor was manhandled by men of the police force. It was at this point that the Deputy Governor decided to leave the scene that was becoming tense while waiting in his car.

“Having waited for a while to see if the situation would change to no avail, he proceeded to take his leave.

“It should be noted that the Deputy Governor put a call through to Alhaji Kunle Sanni, Chairman of Oyo State Muslim Council, who was among the officiating ministers, that he was at the gate and was being denied entrance. Alhaji Sanni responded that his hands were tied. This is a clear indication that what transpired was premeditated.

“There was no truth in the family saying they were not aware that the state government delegation was at the gate because Mr. Bolaji Tunji was severally called by men of Civil Defence at the gate.

“Even if the Deputy Governor arrived when the prayers had started, it is a well-known fact in Islam that when prayers are on-going and a male walks in, it’s an indication that the prayers have received Allah’s acceptance.

“However, Engr Raufu Olaniyan wishes to re-iterate that the visit of the government delegation to the 8th day Fidau Prayers of His Excellency Senator Isaika Ajimobi was a clear demonstration on the part of His Excellency, Engr Seyi Makinde, that the late governor is held in high regard. He stated that it was only fitting for the state government to show respect to the late governor at the Fidau prayers held in his honor.

“The Deputy Governor also wishes to put it on record that despite the way he was treated by the Ajimobi family, which he refuses to hold personal, he has displayed maturity as required of the public office at this level. He holds no grudges and he will continue to pray that Allah grants the departed former Governor Al-Jana Firdaus.

“Engr. Raufu Olaniyan will also like to draw the attention of the Oyo state Commissioner of Police to the highly unprofessional and unruly conduct of the police personnel at the premises.”

Duties of a mother to her children – Francis Ewherido