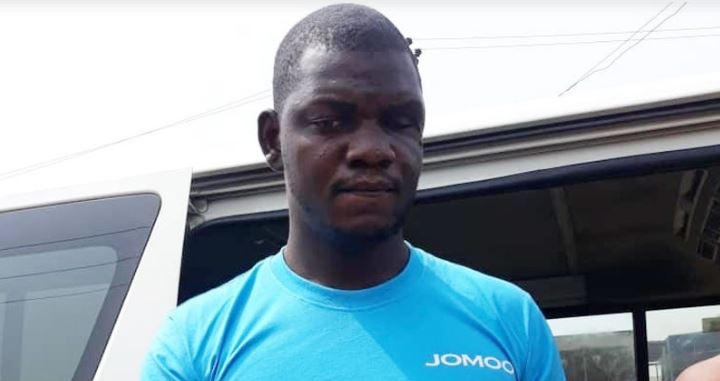 A suspected commander of Boko Haram terrorists, who was recently arrested in Lagos, Umar Abdulmalik, has disclosed his adventures in the crime world including being a terrorist and a bank robber.

Abdulmalik confessed to have been involved in several bomb explosions in Kaduna and Kano states as well as Nyanya and Kuje bombings in Abuja.

He said he partook in the 2012 Koton Karfe Prison break in Kogi State, where over 100 inmates were freed and asked to join his group to attack banks in Okene, Kogi State and Owo in Ondo State.

The native of Okene, in an interview during the week, stated that the proceeds of the robberies were used to procure sophisticated explosives used for terrorism.

Abdulmalik was tracked down penultimate Thursday in Lagos by operatives of the Inspector General of Police Intelligence Response Team. He was later paraded in Abuja along with seven other suspected members of his gang.

The 39-year-old said an Islamic cleric, who he identified as Mallam Mustapha in Okene, initiated him into Boko Haram through radical teachings that frowned on western education and democratic system of government.

He said, “I joined one of the Boko Haram cells in Okene headed by one Zeeidi and we carried out several bombings within Kaduna, Kano and Abuja. Zeeidi was the person providing the bombs and my job then was to take them to our target locations. After a while, the Department of State Services infiltrated our cell and started arresting members of our group. Mallam Mustapha was arrested and his mosque was demolished.

“Zeedi also brought the idea that we should rob banks so that those of us who have not been arrested could have resources to continue with the struggle. He brought some guns and he suggested we should attack the Koton Karfe Prison so we could free our members who were detained there. The attack on the prison was successful and we freed a lot of our members.

“We then attacked some banks in Okene and Owo and made away with large sums of money. We used some of the money we got from those robberies to buy advanced explosives, including materials we could use in producing non-metallic bombs that could beat metal detectors. A lot of our members were arrested after those bank robberies and the attack on the prison.”

Abdulmalik said he relocated to Abuja in 2014 and formed a new gang during which they attacked Banex Plaza, Nyanya and Kuje areas.

He stated that the gang was busted with five members arrested while explosives were recovered from them.

He said he fled to Kano and returned to Abuja two years after to form a new gang that specialised in armed robbery.

It was gathered that the IRT operatives, led by DCP Abba Kyari, got intelligence that led to the arrest of Abdulmalik and his gang members during investigations into the gruesome killing of seven policemen and a civilian, who were attacked in July 2018 at a police post at Galadima Roundabout, Abuja.

In November 2018, the detectives made a breakthrough when they arrested a member of the gang, Abdulmalik Lukman, aka Lampard, in Ondo State.

He reportedly confessed to taking part in the killing of the policemen and named Abdulmalik as the gang leader.

“Lukman took the IRT operatives to the gang’s hideout in Abuja and four of his gang members: Abubakar Sidi; Yusuf Abdulazeez aka, Fine Boy; Suleman Zakariya; and Haruna Lamid, were arrested. But, Abdulmalik escaped with a bullet wound. Four AK-47 rifles belonging to the deceased policemen, six magazines, 270 rounds of AK-47 ammunition and two police walkie-talkie radios were recovered from the suspects,” a police source said.

The source added that Abdulmalik fled to Lagos to treat the bullet wound at his younger sister’s home, where he was arrested.

Speaking further about his robbery exploits, Abdulmalik said, “We robbed a man at a checkpoint in Okene. We pretended to be policemen and collected N1.3m from the man. We then moved to Abuja where we started robbing supermarkets. We also robbed a shop along Second Gate on the Abuja-Kaduna Road. We became friends with a dismissed policeman called Apin Iron. We used to buy drugs from him. In one of our encounters he told us that he knew several rich people we could rob and that he would get his share of the loot.

“He gave us information about a man, who we robbed of N5m. We gave Apin Iron N2.5m as his share because that was what he demanded. He also gave us several other jobs before I had an accident and lost one of my eyes.”