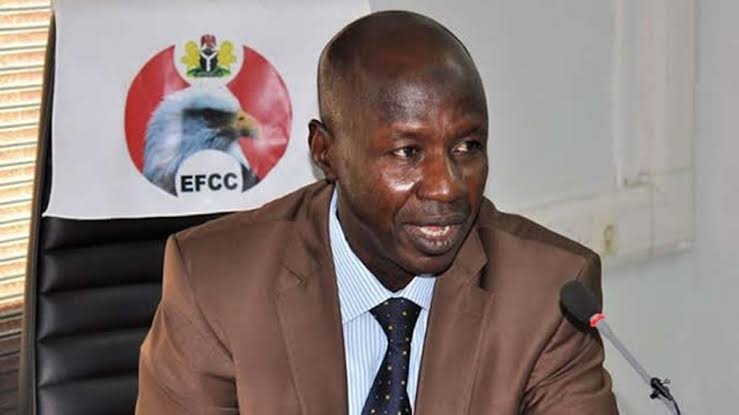 Mr Ibrahim Magu, the embattled chairman of the Economic and Financial crimes commission (EFCC) has been suspended.

According to BBC Hausa, on Tuesday afternoon, the Nigerian Presidency suspended Magu from heading the anti-corruption agency.

Magu’s suspension comes a day after he was grilled by an inter-agency presidential panel on allegations of corruption.

The embattled acting chairman of the EFCC appeared before a presidential committee chaired by former Justice Ayo Salami on Monday.

The presidential committee invited Magu to hear from him on issues related to his leadership at the EFCC.

Some sources have confirmed that Magu spent the night in custody by security forces because investigations were not completed on Monday.

Ibrahim Magu was arrested by DSS security forces in the country on Monday.

After being quizzed on 22 allegations, he was whisked away at about 10.15 pm to the FCID in Abuja.

His escort mobile policemen and security details were stood down before he was taken into custody.

At the Force Criminal Investigation and Intelligence Department, FCID around 10.50pm, Magu rejected an offer to take him into an office to stay the night.

He told the officers in charge to treat him like a suspect by putting him in a cell.

There was drama to Magu’s invitation earlier in the day. He was intercepted on the road along Fomella Street while moving out of the Wuse II office Annex of the EFCC in Abuja.

Invitation was then extended to him by a Chief Superintendent of Police (CSP) from the Force Criminal Investigation Department (FCID).

The CSP’s vehicle had a backup comprising a three-man security team, who closely watched the encounter.

Magu was on his way to the Force Headquarters. He pleaded with the officer to allow him to honour the scheduled appointment. But he was told the invitation by the panel was superior to his appointment.

At about 1.35 pm on Monday, Magu arrived at the Villa.

The EFCC chairman, who went to the Villa with his full escort and security detail, was not molested.

Magu’s travails began following some allegations against him made by Justice Minister Abubakar Malami.

He was reportedly asked to respond to the allegations by the Salami panel Viz:

*Declaration of N539billion as recovered funds instead of N504b earlier claimed

*Not providing enough evidence for the extradition of ex-Minister of Petroleum Resources, Diezani Alison-Madueke

*Alleged sales of seized assets to cronies, associates and friends

*Alleged issuance of investigative activities to some media prejudicial to some cases.