David Oyedepo, the founder and presiding bishop of Living Faith Church Worldwide, also known as Winners Chapel, has just declared the Hate Speech Bill before the Nigerian Senate as “dead’.

TNG correspondent monitored the opening sermon of the church’s annual convention, Shiloh, holding in Canaanland in Otta, Ogun State- Bishop Oyedepo, in the course of his sermon criticised the Buhari government for its repressive policies and bad governance.

Oyedepo who expressed his displeasure over the ongoing legislative process to enact the anti hate speech law stressed that Nigerians can be silenced by the ruling government.

Covid-19: Pastors who want churches to remain close are agents of the devil – Oyedepo

At about 9pm, Tuesday, December 3, 2019, Oyedepo who seemed angry over the state of affairs of the country prayed for Nigeria but couldn’t hide his reservations for the proposed hate speech bill after praying.

His words: “Hate speach law (he exclaimed!!), they want to silence the people…” You can silence men, but you can’t silence a prophet of God, I don’t think anybody love Nigeria the way I do….. ” OYEDEPO said. Hate speech….!!!!, You can’t shut Nigerians Up”

He asked the congregation, “These are people that promised change, where is the change? Where is it? Why are you not saying anything? Why are you keeping quite…That Hate Speech Bill is dead,” he thundered. “It is not going anywhere.”

He declared his love for Nigeria and assured his followers that God’s agenda for Nigeria must come to pass.

This year’s Shiloh, a 5-day programme, is tagged “Breaking Limits” and is participants are expected from more than 70 countries in the world.

In November, the Senate has introduced a bill which seeks to establish a federal government agency to check hate speech in the country.

The bill, sponsored by a former senate spokesperson, who is now the deputy senate whip, Sabi Abdullahi, passed first reading on the floor of the red chamber on Tuesday, November 12, 2019.

It is titled National Commission for the Prohibition of Hate Speeches (Estb., etc) Bill 2019.

A similar bill sponsored by Abdullahi in the 8th Senate prescribed among others, death by hanging for anyone found guilty of the offence.

The controversial bill has received widespread condemnation from Nigerians for its anti-democratic nature. Professional media organisations have kicked against the bill as well. 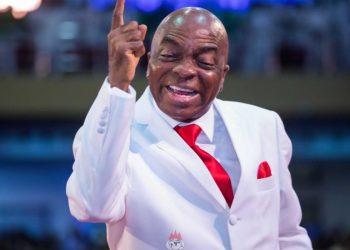 Covid-19: Pastors who want churches to remain close are agents of the devil – Oyedepo

COVID-19: If Trump can declare places of worship open in US, Nigerian govt has no choice – Oyedepo