by Olaotan Falade
in Nigeria, Top Story
0
17
SHARES
430
VIEWS
Share on WhatsAppShare on FacebookShare on TwitterShare on LinkedInShare on TelegramSend as Email

The Presidency says President Muhammadu Buhari is set to present the 2020 Appropriation Bill to a joint session of the National Assembly (NASS) on Tuesday.

Mr Femi Adesina, the Special Adviser to the President on Media and Publicity, confirmed this development at the end of an extraordinary meeting of the Federal Executive Council (FEC).

The meeting which considered the 2020 budget proposals before its presentation to the National Assembly on Tuesday by 1.30pm, was presided over by President Buhari at the Council Chamber of the Presidential Villa, Abuja, on Monday. Adesina, who briefly spoke to State House correspondents, said: “No briefing, we only looked at what we will present at the National Assembly tomorrow”, referring to Tuesday’s presentation of the 2020 budget proposal to the NASS by President Buhari.

President Nuhari is expected to lay the 2020 budget before a joint session of the Senate and House of Representatives on Oct. 8 for approval, “as the country intends to revert to the January to December budget cycle.’’

The News Agency of Nigeria (NAN) reports that the early presentation of the 2020 budget is meant to return the Federal Government budget cycle from May-June to January-December.

However, President Buhari and the leadership of the National Assembly had on Sunday night (Oct. 6) met behind closed doors at the President’s official residence in Abuja in what appeared to be `2020 budget reconciliation meeting’. 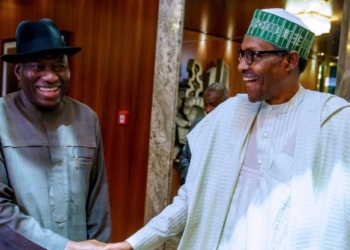