by Ediri Oyibo
in Nigeria, Top Story
0
17
SHARES
423
VIEWS
Share on WhatsAppShare on FacebookShare on TwitterShare on LinkedInShare on TelegramSend as Email

The former governor of Cross River State, Donald Duke, has said governments at all levels in the federation are not spending enough on her citizens.

The Cross River former governor stated this in his keynote address at the 3rd Mike Omotosho annual lecture that held today in Abuja.

He went further to say that the leadership of present administrations “aspire for the things of other countries”, stressing “but you’re not concerned about your own country”.

Give me 12 hours to clear my N537m debt, Donald Duke begs court

Expounding on the theme of the lecture, Duke asserted that “Millennials are technologically sound”, and charged they should take over the mantle of leadership”.

“Millennials, nobody’s going to hand over authority to you. You’ve got to grab it,” he stated.

Speaking on if Nigeria is a failed state, he said, “I don’t know what the definition of a failed state is; but a country that cannot provide for her people is failing”.

In attendance were Dr. Mike Omotosho, who is presently the Labour Party national chairman, his wife, Dr. Sisi Omotosho.

Also in attendance were the Senior Special Assistant to the Kebbi State Governor, Aisha Augie-Kuta and Former Governor, Cross River, Donald Duke, who was the keynote speaker.

Give me 12 hours to clear my N537m debt, Donald Duke begs court 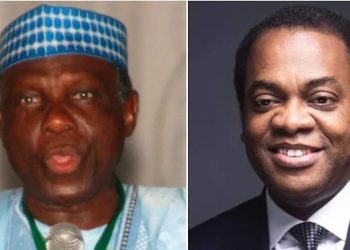