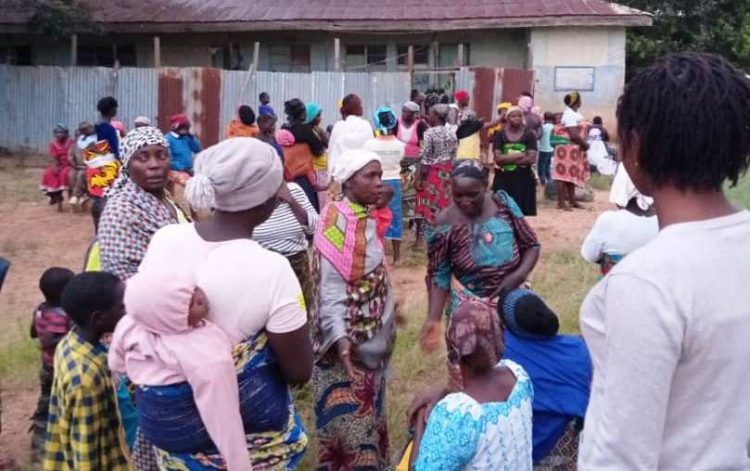 96
SHARES
2.4k
VIEWS
Share on WhatsAppShare on FacebookShare on TwitterShare on LinkedInShare on TelegramSend as Email
ADVERTISEMENT

…we just registered 420 Households, 851 persons in the camp says officials…

…my daughter was chased and stabbed and left to drawn in River Kaduna, woman cry out…..

From Thursday 9th July up till Sunday (today) 12 July, major communities under curfew in Zangon Kataf Local Government Area in Southern Kaduna have been tensed. No thanks to the latest herdsmen attack which began on Thursday and continued on Friday in Chibob and it’s neighbourhood all in Zangon Kataf without security interventions as at the time of writing this report.

Over 420 households made up of 851 persons from 13 communities in Zangon Kataf have abandoned their communities to nearby Zonkwa, the headquarters of the local government where an emergency internally displaced persons (IDP) camp was created by some residents.

Correspondent, Emmanuel Bagudu who drove from Kaduna to meet the affected victims in their various locations of refuge presents this report.

Fear, anxiety and indignation best describes the surviving victims of Chibob and 12 other communities in Zangon Kataf Local Government who were attacked on Thursday and Friday by bandits they described as herdsmen.

The Victims who laments the lost of their loved once from the attack are indignant; they are shocked that despite the 24 hours curfew imposed by the State government, hardened criminals had a field day in their communities without apprehension.

It was an emotional experience while trying to gather facts as more survivors of the attack keep arriving as at 10 am on Sunday Morning when I arrived the camp located at the ECWA Christian Academy, Zonkwa.

Being an indigene of Zangon Kataf Local Government with fluency in Atyap and Bajju tribes and with mild understanding of Ikulu and Kamatan tribes as well as Chawai, a tribe from neighbouring Kauru Local Government, I knew gathering real facts and listening to people’s story will be quite adventurous.

While embarking on the journey to Zangon Kataf, a lot of fake news and misconceptions about the attack was already making the rounds in the State capital Kaduna.

“Be careful,” a friend warned me before I left.

A lot of persons living in the Kaduna metropolis believe the place is a war zone since the discovery of the corps of one Mr Yusuf Shehu Magaji in June this year, at a river bank in the border between Zangon Kataf and Kauru Local Government area of Kaduna State.

It was gathered that Mr Magaji’s demise was as a result of a clash over a piece of farmland between him (Magaji) and some Hausa-Fulani men, hence the imposition of the 24 hour curfew, which the State government is yet to relax.

Although Magaji is from the Chawai speaking tribe (Kauru LGA), he was born and brought up in Sako, a land of the Atyaps (Kataf) in Zangon Kataf, who are known to be very revengeful and repulsive to the Hausa-Fulanis whenever they temper with the lives and property of their kinsmen or anyone close to them.

All was set. I covered a total distance of 200 kilometres from Sabon Tasha Kaduna to Zonkwa, to Yabak, Takanai Zango, Sako, (asha-a-wuce), Sabon Kaura and Chibob, the most affected village in the attack.

Sabon Kaura and Chibob are the only communities attacked but residents neighbouring the two villages who claimed they received threats messages of attack by herders have to join the Chibobs to throng the Zonkwa IDP camp.

Before reaching Chibob, I touched down at Zonkwa where over a thousand persons from 13 villages, including Chibob were all at the ECWA Christian Academy IDP Camp. They were mostly made up of women and children.

Zachariah Danjuma, an official of the Camp narrated how they saw the IDPs moving en masse from Gora, (a transit village) on foot.

“They were all angry at the State government” Danjuma said, adding that “so far we have registered 420 households, 851 persons in the camp, we have the following Communities mostly women and Children….The men stayed behind to provide vigilante in case of further attacks”.

“We brought them here in the camp yesterday Saturday and as you can see, more are still coming in,” he said.

Breast feeding mothers and children between the ages of 3 to 19 are the most populated in the camp. Religious Organisations and individuals that came visiting had already started sending in donations to the camp in either cash or kind.

“We have received mattresses from Deborah Arise Ministry, and a lot of people come to give us little cash just like you just did,” Danjuma said.

I was taken round classes in the camp which are now converted to shelter for the IDPs and in each class, the IDPs had a lot of stories to tell.

For Mrs Murna Tabat, she witnessed the killing of up to four people while trying to escape for her dare life.

Tabat who spoke in Atyap (Kataf) language narrated how the attackers took advantage of the river Kaduna, which flows and passed through Chibob community.

She said the only way to flee from the attackers was through the river Kaduna, which is already heading towards overflowing due to heavy rains.

That meant only those who could swim the already “tempest looking river” survived the attack, but since the attack was fragmented, some people manage to escape without following through the river, other survivors said.

“My daughter while running was stabbed and as she ran towards the river (river Kaduna), she drowned…. we have buried her before coming,” Mrs Tabat said agonizingly.

This according to Musa made the remaining neighbouring communities to flee for safety since they have already received threatening signs of impending attacks.

Without much-a-do at the IDP camp in ECWA Christian Academy Zonkwa, I proceeded to the communities to see for myself.

From Zonkwa to the 13 communities is just less than 20 kilometres with several shortcuts. I drove from Zonkwa to Ungwan Wakili where I switched to a motorcycle for shortcuts purposes.

From Ungwan Wakili, one can head towards Yabak and Takanai through an untarred road just in front of ECWA church Ungwan Wakili. I moved and all I could see were fierce-looking youths mounting roadblocks and making enquiries. All you need to do is to respond to them in Atyap (Kataf) language and you are free to go. You dare not record anything or risk losing your life irrespective of the language you speak.

I rode passed several youths until I reached Yabak village. All I saw are men and youths on patrol. Just after Yabak is Takanai. Youths from the 13 communities engaged in a massive patrol.

“We are looking for Fulani men that attacked us last two nights,” one of the youths who pleaded anonymity said.

Asked whether they have seen any security person around, he said, “yes they just left for Chibob, where the real thing happened. Here, we are just defending. They told us they are coming, but we have not seen them (referring to the bandits)”.

All the villages are attached to each other. I was told by a community head who also pleaded anonymity that only Chibob and Sabon Kaura were attacked, but since the remaining communities are neighbouring them, and have received threatening signs, everyone had to run for their lives.

In Chibob and Sabon Kaura, it’s a mourning mood. Security men have already taken positions. I was interrogated, but being an indigene of Magamiya and born and brought in Zangon Kataf and with valid means of identification, I exonerated myself.

It is a very precarious situation right now in Zangon Kataf and only the Atyap speaking tribe are directly affected.

A lot of questions are being asked such as: what happened to the curfew imposed in the local government with strict reference to the Atyap chiefdom?

It is the peak of the raining season; will the State government allow bandits deny residents of their only source of livelihoods which is farming?

All these and many more questions remained unanswered as the IDPs at ECWA Christian Academy Zonkwa also look forward to reuniting with their fathers and brothers soon.