Flood: Prices of food items soar high in the northern part of Nigeria 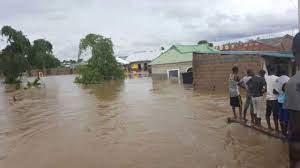 Food items prices  have continued to soar high beyond the expectations of the people in the north due to excessive flooding in the last quarter of year 2022.

The Emir of Zazzau, Ahmed Nuhu Bamali had earlier predicted that hunger may surface in the north due to flooding.

Report say that the increase in prices of food in Sabon Tasha, Kawo and Central markets in Kaduna is due to the disruption in the supply chain occasioned by recent floods across Nigeria

Musa Arungo another trader in Kawo market on Sunday told newsmen that apart from foodstuff, there would be a scarcity of meat, onion and pepper, because these essential commodities did not yield produce this year, due to flooding in the northern part of the country.

” I load trailers of pepper, onion, from Gombe to Kaduna, and sometimes, to other states. But this year, the reports I am getting now is that no single pepper in the farm this year.” He said

Jonathan Musa who claimed to be a full-time farmer from Kagarko Local government area of Kaduna State said the excessive rain made him lose all his farm produce.

Rhoda Moses, who sells dried cassava, beans, yam, and sweet potatoes at the central market in Kaduna said for five weeks now, she has not been able to receive supplies from farmers in Kogi, Delta, Ogun or Anambra due to the flooding.

“Most of my suppliers come from different states; Lokoja, Delta, Anambra, River, etc, but since flooding took over some states, I learnt their farm could no longer be assessed. Even those who want to sell, can not enter Kaduna, because flood took over Kogi road.”

” I am a farmer, who cultivates yam, maize, plantain, and cassava in large quantities and supply to Kaduna main town. Many farmers in my area were forced out of business, due to excessive rain.” He said.

Mrs. Grace Adama who buys wholesale and sells in retail said prices of foodstuff increase daily. She said a bag of rice she bought on October 20 for 35,000 Naira, was sold for 37,000 Naira the following day.

According to her, as the wholesale price increases, so also traders will increase the retail prices of those food items.