Invasion of Odili’s home appeared like mission to kill, maim her – Supreme Court 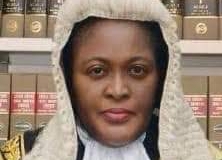 The Supreme Court management, on Tuesday, broke its silence on Friday’s raid on the home of one of its Justices, Mary Odili.

In a statement by its Director, Press and Information, Festus Akande, the apex court said the invasion which “depicted a gory picture of war” appeared like a mission to kill or maim her.

It said the raid carried out under the guise of undertaking a search based on a “questionable and baseless” warrant was “uncivilised and shameful”.

“We are alarmed with the news of the unwarranted and despicable raid on the official residence of one of our senior justices in the Supreme Court, Hon. Justice Mary Peter Odili, JSC, CFR on Friday October 29, 2021 in a Gestapo manner that unfortunately depicted a gory picture of war by some armed persons suspected to be security operatives representing different agencies of government, who seemed to have come to kill and maim their target under the guise of undertaking a search whose warrant was questionable and baseless.

“We are deeply saddened and taken aback by this uncivilized and shameful show of primitive force on an innocent judicial officer that has so far spent several years of her productive life serving the country she calls her own.”

Condemning the raid, the apex court drew parallels between it and the similar one carried out by the State Security Service (SSS) operatives on the houses of some judges, including two Justices of the Supreme Court, in Abuja and other parts of the country in 2016.

In a fashion like the SSS operatives’ 2016 invasion of judges’ homes, some security operatives including police officers laid a siege to the home of Mrs Odili, the wife of a former Governor of Rivers State, Peter Odili, at Imo Street, Maitama, Abuja, on late Friday.

A chief superintendent of police, Lawrence Ajodo, had applied for and obtained a search warrant from the Wuse Zone 6 magistrate’s court in Abuja, for execution on the Maitama, Abuja residence of Mrs Odili, who is the second most senior justice of the apex court.

Mr Ajodo claimed, in the court document, to be acting on behalf of a certain joint asset recovery team allegedly being coordinated by the Federal Ministry of Justice.

He said the application was based on an ongoing investigation into whistleblower information suggesting that “criminal activities” were taking place in the house.

Security operatives invaded the home on October 29 to execute the search warrant obtained from the magistrate’s court, but it was doubtful they were able to gain entry.

The magistrate who issued the search warrant reportedly revoked it later that day on the grounds that he was misled to issue it.

The Attorney-General of the Federation, Abubakar Malami, who superintends over the Federal Ministry of Justice, distanced himself from the raid and the court processes on Saturday.

“This incident brought back, rather painfully, the ugly memory of the October 2016 midnight invasion of the homes of our respected justices with no satisfactory explanations as to the true motive behind such brazen assault on our collective sensibility,” the Supreme Court’s statement said.

The apex court said the judiciary being the third arm of the government of the Federal Republic of Nigeria “should be respected and treated as such”.

“We have had a full dosage of this fusillade of unwarranted and unprovoked attacks on our judicial officers and even facilities across the country and we say it loudly now that enough is enough.”

It added that the judiciary should never be misconstrued by any individual or institution of government as the weeping child among the three arms of government that must always be chastised and ridiculed to silence because of our conservative disposition.

The Supreme Court it had carried out an investigation into the incident, but also called on the Inspector-General of Police, Alkali Baba, to discretely probe the matter and make its outcome public.

“We commenced a full-scale independent investigation to unravel the true masquerades behind the mystery as well as the real motives behind the whole imbroglio,” the statement said, but did not disclose the findings of the probe.

It added : “Similarly, we call on the Inspector General of Police of the Federal Republic of Nigeria to rise up to the occasion by carrying out a discreet investigation and make his findings known to the Nigerian public with a view to bringing the perpetrators to justice as quickly as possible.”

[Devotional] IN HIS PRESENCE: Who do men say you are