Masquerade burns to death during fire stunt in Anambra festival 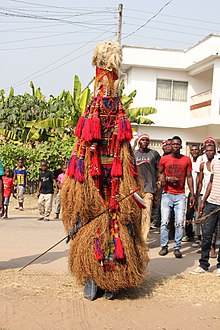 A man whose identity has been concealed has burnt to death  while trying to pull a stunt in Anambra state.

The incident happened at Ogbunike, Oyi local government area of Anambra state during the Eli’m Ede’ Cultural Festival, which took place  on Saturday.

The festival is a yearly   event, where masquerades of various  shapes and sizes  gather at the village square to entertain indigenes and onlookers .

An eye witness who was at the scene of the incident summarized what transpired.

”The masquerade attendants while leading the masquerade to Amawa square, had pulled a fire stunt in front of the masquerade, which was sitting on the ground, but immediately extinguished it”

“Unknown to the attendants, the fire had entered the raffia costume worn by the masquerade, and before they could put it off, it spread all over the body of the masquerade, causing the man serious burns,” he said.

The man, who sustained serious burns, was rushed to the hospital, where he gave up the ghost on Sunday evening.

Cameroon-Nigeria: Check out the similarities and differences in culture and tradition

Cameroon-Nigeria: Check out the similarities and differences in culture and tradition