...Akpabio wanted me to take secret oats, commit fraud on his behalf 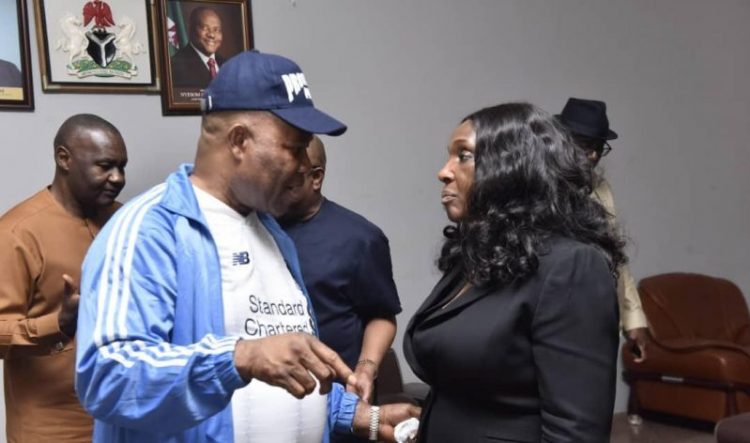 Minister of Niger Delta Affairs, Senator God’swill Akpabio is trending number one on Twitter. The reason for his unusual trend TheNewsGuru.com TNG learnt is as a result of grievous allegations made by the former Managing Director of the Niger Delta Development Commission (NDDC), Joy Nunieh.

Nunieh said out of the N81billion spent by the Commission between October last year to May this year only N8billion was expended by Interim Management Committee (IMC) under her leadership for the months period spent ( October 29, 2019 to February 18, 2020).

She alleged while answering questions from Journalists during a press conference on Saturday that Akpabio engineered her removal from office for failing to dance to his tunes as regards writing implicating Chairman , Senate Committee on Niger Delta Affairs , Peter Nwaoboshi on fraudulent contracts awards and executions.

In her words: “The minister did all manner of dirty things to forcefully remove me out of office like sponsoring the vandalisation of Agip trunk a pipeline in Bayelsa as a way of making the unsuspecting public to believe that the youths in the area are angry with NDDC under her leadership. He even made frantic attempts to force me to swear to fetish oath which i vehemently refused before he succeeded in getting me out of the place for sole purpose of having his way to run the place the way he likes under the present team of IMC”.

Insecurity: Nigerians are hungry, frustrated, CAN cries to FG

TNG Interview: FG should save 20,000 species of fishes in the Niger Delta before they go extinct – Hon Abiante

However, Nigerians in their thousands have expressed opposing and supporting views on the former MD’s accusation.

See a few as compiled below:

Akpabio is a big time crook.. he ought not to be a minister after looting akwa ibom.. NDDC is one organization that year in year out that they loot money massively under the guise of audio projects.

After we all laugh at Akpabio and his "existence"
The NDDC should be scrapped and all those who have ever worked there probed.
The insanity in the MDAs in this country can give you High BP.#wearetheproblem

Do you think we are fighting corruption here n Nigeria?

Do You think Magu or Akpabio will truly be Prosecuted? If your answer is Yes.

Then you are a lost cause. Am sorry we lost you

Now Godswill Akpabio. It takes a thief to make thieves his working mates. Show me corruption fighter in NG and I will show you how foolish you are. #Hushkpabio pic.twitter.com/0OuR93suN3

Akpabio
Nobody can bring you down!
Whom God has blessed, no man can curse.
They'd continue to fail in their bid to bring you down, cos you are a Grace carrier. It's only simpletons that'll believe the cock and bull stories about you and we can only but pity them. pic.twitter.com/kMEu42ATia

Nobody is talking about this woman that exposed Akpabio corruption and even tried making her take oaths. She gave names, meeting points etc.

This is why I like women. She gave names. Not a single fear at all.

Magu can't even name one name since.

I witnessed #NDDCProbe .
Akpabio testified under oath.
It's funny coming on this app to realise that akpabio @Senator_Akpabio is trending over an allegation by a lady who refused to speak under oath by the panel but she spoke to the media because she wasn't under any oath. pic.twitter.com/HVh6ywcTVN

Ever since Joi Nunieh was sacked as the Acting MD of NDDC, she has become very frustrated, making wild and unsubstantiated allegations against Sen.Akpabio & those she perceived may have been responsible for her downfall.
This Ogoni woman was sacked for lack of NYSC certificate. pic.twitter.com/1xvtLFXO8M

Now I know why "giants" under APC became midgets. Joy Nunieh just confirmed it now that THEY FORCED HER TO TAKE OATH but she refused and that's the beginning of her issues with Akpabio and the COVIK cult.

APC IS NOTHING BUT A CULT.pic.twitter.com/gCBpPBwBwG

Look at the people that want to defend Akpabio, Buhari covenant and Buhari's sister with a man dp 😂😂😂, bunch of jokers 😅😂

So who will probe Akpabio now since Magu-ot the prober is being probed for corruption ? pic.twitter.com/8cIQUn8sHJ

I think Akpabio left PDP to join the APC so he could have more access to public funds.pic.twitter.com/3NrrEAzkwQ