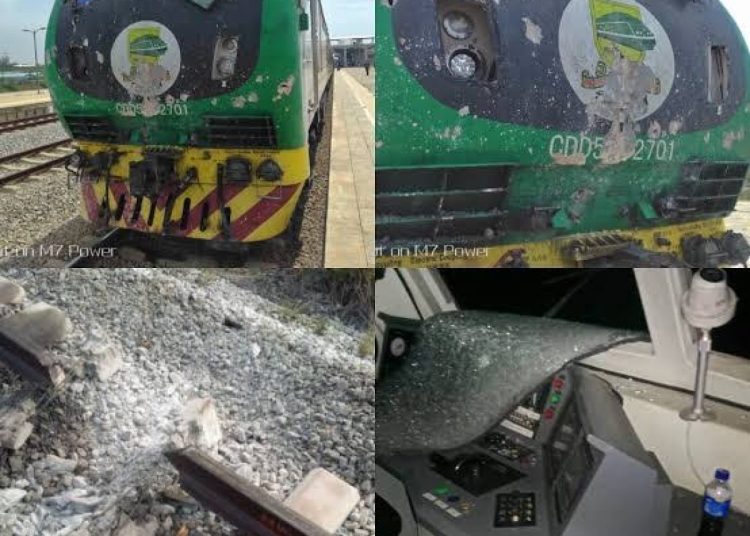 After series of postponements, the Abuja- Kaduna rail service finally resumed on Monday 5th of December, amid tight security.

Upon the resumption after 9 months of stoppage, Passengers seen plying the service expressed mixed reactions about it.

Some expressed happiness that their favourite means of transportation is back, others feel that the country need to tackle insecurity to avoid a repeat of the March 28th attack.

Passengers at Risa train station in Igabi LGA of Kaduna State, on Tuesday were excited following the resumption of the Kaduna-Abuja train service, they were constrained following the increase in ticket fares by the Nigerian Railway Corporation.

Security was observed to be tighter as more personnel were deployed to the station to avoid a repeat of past incidents.

It was gathered that passengers stormed the Risa rail station in their numbers trying to board trains to their various destinations.

A passenger, one Alhaji Ibrahim Musa, who is an estate agent, told pressmen at the Rigasa station on Tuesday, that at least, for comfortability, train service is more preferable.

According to him, since the federal government has put in place security operatives to curtail criminal activities, they only need prayers for sustainability.

Hajia Salamatu Danielle, who said she intended to reach Abuja, said she is no longer afraid of criminals or terrorists’ attack since there are more security operatives on ground.

According to her, she relies on train service than road transportation, since anything can happen along the way.

She called on the NRC to reduce the transport fare in order to accommodate more people who intend to travel this festive period.

However, Mallam Nasir Idris said the slow pace at which trains move would not suit his travel to Abuja for work and return the same day.

According to him, he works in Abuja, returns to Kaduna every evening the same day.

He further expressed fear over ticket fares, adding that in most cases, he gets roadside vehicles at N1,000 to Abuja.

Anita Bakare a female passenger, said that she has been waiting anxiously for the resumption of the train service to have a feel of what it looks like.

Another passenger. James Ani appealed to the Federal governmnet to tighten security and ensure that insecurity is a thing of the past.

For Hakeem Tajudeen, the Federal Government shouldn’t have increased its charges.

Mrs. James Alice said the federal government should have compensated them in the first week of train services since passengers were victims of bandits attack on March 28, 2022.

According to her, even if the federal government had muted the ideas of increasing transportation fare, they could have allowed passengers to enjoy the service for at least two weeks, or reduced the fare to the barest minimum.

Akintunde Christopher, said that he enjoys using the rail service because its fast and doesn’t experience traffic on its way but appeals to FG to reduce its transportation fare.

Tunde Ajibola says the Train is a relief compared to the hassles on the road, saying that the accident rate is very minimal.

He added that the March 28th incident isn’t a regular experience.