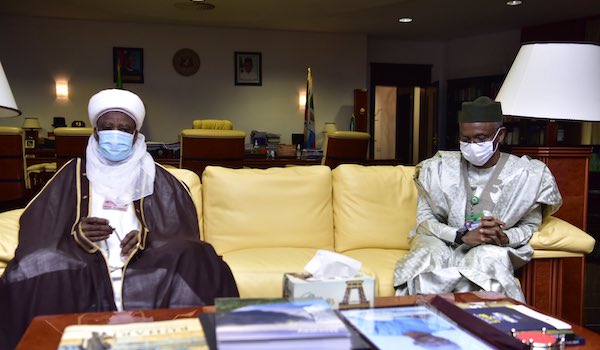 #EdoDecides2020: Three weeks ago, we were sure of victory for Ize-Iyamu- El-Rufai

1.1k
Gov. Nasir El-Rufai of Kaduna State on Monday met behind closed doors with the Sultan of Sokoto, Dr Sa’ad Abubakar at the Government House Kaduna.
Though the Sultan did not disclose the outcome of the meeting, the governor said the Sultan “expressed his support for our efforts at bringing peace to Kaduna state.’’
El-Rufai told newsmen after the meeting that his relationship with the Sultan started when he was a student at Barewa College Zaria.
“He knew me since I was 12-years-old and he used to advise us on what we needed to do and how to achieve peace and progress.”
According to him, the Sultan expressed happiness that various religious and ethnic groups have suggested measures on how to promote peace in Kaduna state.
‘’The Sultan also prayed to God to bring peace not only in Kaduna state but Nigeria in general, especially the insecurity bedeviling northern Nigeria,’’ he added.
The governor stressed that the concern of his administration has always been to see people living together in peace.
He welcomed the Peace and Reconciliation Summit held in  Zangon Kataf Local Government on Saturday, where the Atyap, Hausa and Fulani communities resolved to live in peace.
He noted that the major religions “teach us to love for others what we love for ourselves”.
“Therefore, we are happy with what the Chief of Atyap started. May God reward him for inviting all the ethnic groups under his chiefdom to agree to live in peace and harmony.’’
The governor prayed that the initiative would be the beginning of lasting peace in southern Kaduna.
Tags: el-rufaiSouthern-Kadunasultan #EdoDecides2020: Three weeks ago, we were sure of victory for Ize-Iyamu- El-Rufai