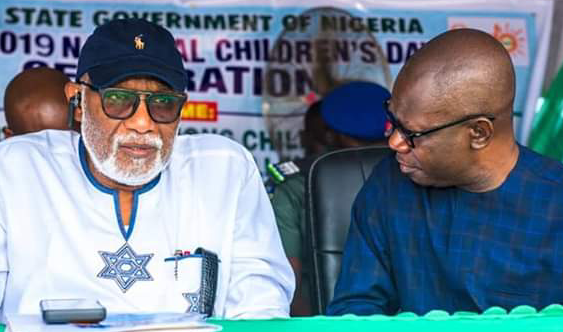 191
SHARES
1.4k
VIEWS
Share on WhatsAppShare on FacebookShare on TwitterShare on LinkedInShare on TelegramSend as Email
ADVERTISEMENT

Ondo State Governor, Rotimi Akeredolu, and his campaign team are now grappling with how to sell his reelection bid amid disturbing waves frustrating his chances of becoming the toast of the town and pushing him to lose ground to opponents in his aspirations to lead Ondo for another term.

Before Akeredolu announced his Covid-19 status on Tuesday, Aketi, as he is popularly called by his admirers on campaign fronts, hardly gets quality mentions in the media space when compared with the grand newsworthiness and dramas that catapulted his counterpart in Edo, Godwin Obaseki, from All Progressives Congress (APC) to the Peoples Democratic Party (PDP), a clear indication of Aketi’s wobbling and uninteresting campaign.

Though Akeredolu wields the power of incumbency in Ondo, he is, however, as a result of his poor political sagacity losing traction even among his core constituencies.

Why Tinubu, other APC cabals are angry with Obaseki, want forceful takeover of Edo – PDP

Considering the intermittent twists and turns of politics, especially as regards Nigeria where electoral decisions and processes are fraught with much more volatility, to head a governorship campaign from self-isolation is a hook in the throat of Akeredolu’s campaign team.

Bracing up to the new challenge, the governor who disclosed his Covid-19 status in a broadcast widely circulated on social media has assured his people that he will continue to perform his official duties from his self-isolation

His exact words, “Let me assure our people that the work is going on here at home I will be attending to files which are the normal thing I do and there is nothing that will stop work from going on.

“I want to plead with my political associates that they should continue with the project we are sure to win. “As you know, I am gifted to get through to my destination, knowing that I am a man with special gifts, and my trust in God to get through this is unshaken.”

While we observe how politics will subsequently unfold in Ondo as Akeredolu rules from isolation, time will tell if the outcome will be favourable for the Aketi’s ahead of the governorship election in the state.

Another apparent hole in Akeredolu’s re-election bid is his frosty relationship with his deputy, Agboola Ajayi, who recently decamped to the People’s Democratic Party (PDP) but was able to keep his position.

As a governor who has zero capability to influence his lawmakers, Akeredolu finds it difficult to expel his deputy, who is now a thorn in the flesh of Aketi’s journey for a second term ambition.

Things got uglier for Akeredolu after he slipped into the confinement of Covid-19, and his deputy started pressuring him to hand over government pending the time he recovered from the virus.

Akeredolu swiftly reacted on the issue of Ajayi running the state’s affairs as he battles the deadly virus, he said the idea of handing over power to his deputy should be buried, noting that he (Ajayi) had exhibited traits of a betrayer.

Reacting to the position of the governor, Mr Ajayi said “ordinarily, one expects Mr Governor to bring to the front burner the background of his profession as a lawyer and Senior Advocate of Nigeria, (SAN) but surprisingly, the Governor has chosen this perversion of justice… ”

The deputy governor, who reacted on the matter through his media adviser, Allen Sowore, on Saturday furthered: “Section 190(2) of the 1999 Constitution of the Federal Republic of Nigeria (as amended) is apposite in this circumstances. On our part, we will continue to pray fervently for Mr Governor’s quickest recovery. However, it should be noted that Mr Governor is at liberty to handover or not within 21 days after which the constitution becomes operational.

3: MIMIKO: An undeniable force to reckon with in Ondo

To date, the enigmatic role the former Governor of Ondo State, Olusegun Mimiko plays in Ondo’s politics remains unparalleled. This phenomenal Ondo politician, who is nicknamed ‘Iroko’, a large tropical western African tree is undoubtedly rooted in the heart of Ondo people and has one of the largest political support bases in the state.

In 2016, Akeredolu had an easy ride to power only because his major challenger at the time, Eyitayo Jegede of Peoples Democratic Congress, who was backed by Mimiko was troubled by the legal battles with Jimoh Ibrahim, over the legality of his candidacy as a PDP flag bearer.

Despite the obscurity of Jegede in politics and the burden of the legal war with Jimoh Ibrahim, which slowed his campaign in 2016, he was still able to put up a good show in the election. Recall court granted him a delayed justice (two days to the election) that denied him the opportunity to sell himself, all thanks to Mimiko who was able to save him from an abysmal outing.

More intriguing is the slant among political analysts that Mimiko eventually consolidated Akeredolu’s emergence as governor, a last-minute decision he was said to have made as a back-up to the cracks in Jegede’s campaign at the said time.

If not then, Mimiko after his exit had given more support to the Akeredolu-led government in several capacities.

However, the failure of Akeredolu to return the favour from Mimiko made supporters of Iroko build their tents far from the Aketi’s, again, this further dwindles Akeredolu’s political influence and favours his opponents in the governorship race.

Noting Akeredolu’s lapses, Oyo State governor, Mr Seyi Makinde, who is regarded as the leader of the PDP in the region, recently led some members of the party to Ondo home of the former governor Mimiko to solicit for his support in the election.

The details of the meeting which was held between the two political leaders and some other PDP leaders to pacify Mimiko to support the PDP candidate in the election, this romance will dangerously affect Akeredolu’s reelection plans.

Mimiko was a member of the PDP before he dumped the party for Zenith Labour Party, (ZLP) after his second term in office in 2017.

Since the day he was sworn into office, Akeredolu never denied placing more priority on his household interest at the expense of the state’s machinery or his political group ( house of assembly, cabinet, APC members).

Nicknamed in the streets as ‘One-family-government’, unapologetic Aketi and his wife, Betty have both argued with critics who accused him (Aketi) of running Ondo state like a family affair.

One good example was when he (Aketi) addressed the criticism that his son Babajide, handles most of the projects in the state.
In March, while speaking in Akure during a dinner organised in commemoration of his third anniversary as governor, Akeredolu while justifying his actions told critics his son worked harder than most members of the campaign.

His words: “When somebody says Baba (Babajide) is this, I just laugh at them. If I wanted to make Baba my chief of staff, he can be; did you do more than him in the campaign? Ask yourself, how many of you did more than Baba in the campaign? How many?” he asked.

Utterances like the one stated above damaged the perception the public holds about the Akeredolu-led government and even divided those in his core support group.

5. First hurdle: Getting the party’s ticket

In the build-up to the October 10, 2020 governorship election in Ondo State, aspirants of the APC are working hard to surmount all hurdles to win the election for the party. The race to get the party’s ticket is not limited to the 10 aspirants, who had earlier formed an accord to wrest power from the incumbent governor, Oluwarotimi Akeredolu. The governor, too, is battling tooth and nail with forces within and outside the state to retain his seat.

Though not unusual of any governor seeking a second term, Akeredolu seems to be affected on all sides by political adversaries who have sworn to stop his re-election bid and end his tenure in February 2021. Aside from the political opponents in Unity Forum, a medley of APC bigwigs opposed to the governor across the 203 wards due to the 2016 governorship fallout, are also on his case, in addition with the national leadership of the party.

Governor Akeredolu, especially after his colleague in the struggle against the former chairman Oshiomloe, Obaseki, was screened out of the primary election in Edo State, had found uncommon peace with the party’s leadership. The dissolution of APC NWC by President Muhammadu Buhari at a National Executive Council (NEC) meeting last Thursday sent some jitters down the spines of some members and guber aspirants of the party in Ondo.

Though with the suspension of APC’s National Chairman, Adams Oshiomhole and the subsequent dissolution of the National Working Committee (NWC) of the party, it would appear Akeredolu has been handed some advantage over his bitter rivals in Unity Forum faction in Ondo APC.

But, the Unity Forum members are yet to relent, the group presented a donation of N22.5 million to the consensus governorship candidate, Chief Olusola Oke, to obtain his nomination form in Abuja.

The leadership of the group explained that the candidate emerged through a free and fair process, though eight other aspirants in the group rejected the choice of Oke. A former deputy governor of the state and member of APC Board of Trustees (BoT), Ali Olanusi, who was represented by the former House of Representatives member, Afe Olowokere, presented the donation to support Oke’s ambition.

Why Tinubu, other APC cabals are angry with Obaseki, want forceful takeover of Edo – PDP