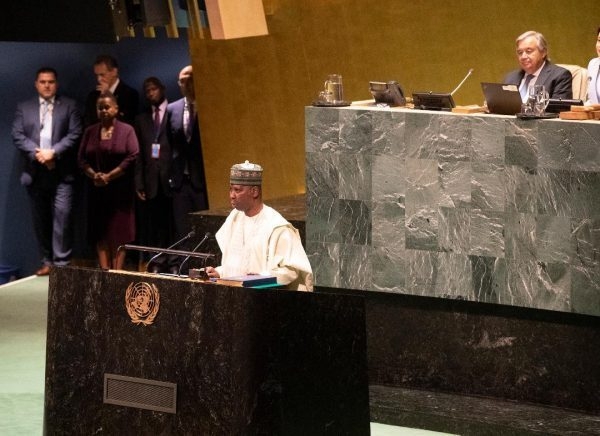 News Agency of Nigeria (NAN) recalls that the UN shut down its New York headquarters in March to check spread of the coronavirus.

The move was also in compliance with the host government’s shutdown orders and social distancing directive.

We were ‘technically bankrupt’ in March – Barcelona CEO

This prompted the 193-member Assembly to suspend physical meetings and go virtual.

NAN reports that the UN is currently in Phase 2 of a gradual reopening process that began on July 20.

Thursday’s meeting held under strict social distancing rules and in line with the Phase 2 guidelines that permit only 40 per cent of normal occupancy.

Welcoming the delegates, President of the Assembly, Amb. Tijani Muhammad-Bande, thanked them for defying the pandemic to advance the goals and principles of the UN during the period.

“As the chief deliberative body of the United Nations, this Assembly has continued the work of our Organisation throughout the period.

“It has done so in full partnership with the Secretariat and all other UN organs.

“I commend you for your foresight in adopting Decisions 74/544 and 74/555, which have allowed the Membership to adopt more than 70 resolutions and elect Chairs of the Main Committees for the 75th session of the General Assembly.

“This has ensured business continuity on critical issues for the Assembly and for the United Nations,” he said.

Muhammad-Bande, who is Nigeria’s Permanent Representative to the UN, lauded Member States for their commitment to the fight against COViD-19.

This, he said, resulted in the adoption of two resolutions “with wide co-sponsorship, calling for solidarity and global access to medicines and medical equipment”.

The UN Chief highlighted other achievements of the lawmaking body during the pandemic to include successful conduct of election for the presidency of the 75th session of the Assembly.

The election held on June 17 alongside those new members of the Security Council and the Economic and Social Council.

Muhammad-Bande lauded the World Health Organisation, the UN Secretary-General and the Economic and Social Council for their leadership in the COVID-19 response.

“The entire UN system has rallied to address the needs of the people we serve.

“I pay particular thanks to our humanitarian workers in the field and our Peacekeepers, who continue to protect communities in the most complex environments around the world.

“These efforts are critical as we begin the Decade of Action and Delivery to implement the Sustainable Development Goals, or as it is likely to become, the decade of recovery from the COVID-19 pandemic.

“I urge you to galvanise multilateral action now and fulfill our financing for development and other commitments. We remain in this together,” he said.