Ekiti State Chapter of the Peoples Democratic Party, (PDP), on Sunday, declared its readiness to participate in the forthcoming Local Government elections scheduled for Dec. 7.

In a statement by the State Publicity Secretary of the Party, Mr Jackson Adebayo in Ado Ekiti, PDP maintained that there was no amount of shenanigan that would stop the party from its resolve to participate in the election.

This position has also been corroborated by all the 16 Local Government Chairmen of the party in the state as the party threatens to brand members working secretly against its interest as rebels, with appropriate sanctions awaiting them.

The Party described its members calling for boycott as fifth columnists working for the ruling APC.

“We are aware of some fifth columnists among us who, perhaps, are working in collaboration with APC to stop PDP from participation in the election due to public opinions that favours us.

“It is not unusual for some members to want to play fifth columnist in any political party, but whenever such action is established, it would be naturally treated as an anti-party activity

“Rather, we should concentrate our energy on strategies that can win the election for us instead of allowing some black agents to plant distractions in the Party,’’ he said.

Adebayo, who said that apart from the decision of the State Executive Committee of the Party to participate in the election, the State Working Committee (SWC) had also been up and doing in preparation for the election.

According to him, all necessary forms had been obtained by candidates while the party has concluded all documentation at the State Independent Electoral Commission (SIEC) and only waiting for substitution if any need arises.

The PDP spokesman also explained that the Party had put some mechanisms in place to ensure unity in the Party which informed why imposition of any form was not allowed in the primaries of the candidates of the party.

The PDP state Chairman, Chief Gboyega Oguntuwase, in an interview confirmed the stand of the party.

“The position of the extended EXCO and the SWC, with all party chairmen of all the local governments remains same.

“We met and we discussed extensively on what the PDP should do concerning the local government election.

“We all resolved that, in the overriding interest of the party, so that there will be activity in the party, so that Ekiti people will have option, so that the fundamental provision of the constitution that we all have right to vote and be voted for would not be blotted out by unnecessary emotions and sabotage, we should participate in the elections.

“Any chairman of any local government that is making any announcement to the contrary, no matter who is backing him, shall receive adequate query and punishment for leading a rebellion at the appropriate time

“I, as the state chairman, confirm that we shall take part in the elections,’’ Oguntuwase said. 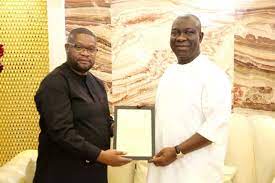