Investigations by TNG has revealed why a former acting governor of Adamawa State and governorship candidate of the Peoples Democratic Party (PDP), Ahmadu Umaru Fintiri’s name appeared on President Muhammadu Buhari’s list of 50 high profile Nigerians banned from travelling outside the shores of the country.
Recall that the president last week Saturday issued the ban under Executive Order 6 (EO6).
The travel restriction followed the judicial affirmation of the constitutionality and legality of the Executive Order 6 (EO6).
The watch-list and restriction were put in place pending the conclusion of the cases against those affected.
Why Fintiri made the list
Checks by TNG revealed that Fintiri who was also a former speaker of the Adamawa State House of Assembly has been in and out of the court for allegations bothering on fraud and bribery shortly after leaving office as acting governor in 2016.
However, like some other people on the list, Fintiri’s trial has spanned over two years with several adjournments and no judgement in sight.
Having emerged as the governorship candidate of the Peoples Democratic Party (PDP) in Adamawa in a keenly contested election amongst other former governors in the state on October 1, Fintiri’s hope of becoming the next governor of Adamawa State may suffer serious setback with the ban.
The Aisha Buhari’s connection
Recall that the wife of the President, Aisha Buhari also has a stake in the coming election in Adamawa.
Despite the fact that the incumbent governor, Bindo Jibrila is of the ruling All Progressives Congress (APC) and also indicated interested in a second term ticket, the president’s wife is rooting for his immediate younger brother, Mahmud Halilu Ahmad as the party’s flag bearer in 2019.
Aisha Buhari in a straightforward statement shortly after the primaries which edged out his brother condemned the primaries while also indicting the party chairman, Adams Oshiomhole for presiding over such ‘impunity’. She also threatened to boycott party activities if the controversies which thrailed the APC primaries were not resolved before the deadline issued by the Independent National Electoral Commission (INEC).
Aside the president’s wife, a former chairman of the EFCC, Nuhu Ribadu also expressed interest in the top Adamawa job. Ribadu, a former presidential aspirant also condemned the primaries which produced the incumbent governor Jibrin as its flag bearer and called for its immediate cancellation.
More so, both Aisha Buhari’s brother and Ribadu lost their chances as the APC Appeals Panel submitted its report to the National Secretariat on Thursday.
However, according to anonymous sources, Aisha’s brother may likely defect to the the PDP in a desperate attempt to achieve his governorship ambition. Since the party had already chosen Fintiri as its flag bearer, sources claim that concerted efforts were been made to ensure
his (Fintiri) disqualification to allow for a change of name of the party’s flag bearer with INEC. This was not difficult to achieve as Fintiri still has loads of pending corruption cases before the EFCC.
Fintiri’s ‘sins’
Specifically, the Economic and Financial Crimes Commission (EFCC), in the charge marked FHC/ABJ/CR/131/2016, alleged that the former governor had between October 2014 and August 2015, diverted public funds to the tune of N1.9billion.
The anti-graft agency also charged a firm that allegedly served as conduit pipe through which the fund was siphoned, Mayim Constructions & Properties Limited, as the 2nd defendant before the court.

EFCC alleged that Fintiri had at various dates, within the ten months the fraud was perpetrated, transferred funds from account number: 0313000301 domiciled at EcoBank Plc operated by Timeplex Nigeria Ltd, into account number: 5742019591 domiciled at the same bank but operated by the 2nd defendant.
Aside allegation that he used N220million to acquire a property at No 7 Gana Street, Maitama Abuja, Fintiri was said to have within three months he held sway as acting governor of Adamawa State, repaid a N550m loan he secured from Ecobank for the acquisition of a Tea plantation farm from Nigeria Agricultural bank in Taraba State.
EFCC said its investigations revealed that the bank had initially allowed the defendant to repay the loan within twelve months. It said that Fintiri attempted to disguise the origin of the funds which the agency described as “proceeds of an unlawful act, to wit: bribery and corruption”.

The prosecution maintained that the defendant committed an offence contrary to sections 15(2) (a) of the Money Laundering (Prohibition) Act, 2011, as amended in 2012 and punishable under section 15(3) and (4) of the same Act. Count-five in the charge dated June 16 and signed by the Deputy Director, Legal & Prosecution Department of the EFCC, Mr. Sylvanus Tahir, read: “That you, Ahmadu Umaru (Alias Rt. Hon. Ahmadu Umaru Fintiri) and Mayim Construction and Properties Ltd, between the 3rd of June 2014 an 4th of August 2015 in Abuja within the jurisdiction of this Honourable Court did retain in your US Dollars account number 5742019601 domicile at Ecobank Plc, the aggregate sum of $4, 830, 000.00 (US Dollar Four Million eight hundred and thirty thousand) which sum you know form part of proceeds of unlawful act to wit: corruption and thereby committed an offence contrary to section 15(2) (a) of the Money Laundering (Prohibition) Act, 2011 as amended in 2012 and punishable under section 15(3) and (4) of the same Act”.
49 others affected by the ban
TNG reports that apart from Fintiri, others on the list include; ex-governors Saminu Turaki (Jigawa), Murtala Nyako (Adamawa), Adebayo Alao-Akala (Oyo), Gabriel Suswam (Benue), Rasheed Ladoja (Oyo), Orji Uzor Kalu (Abia), Danjuma Goje (Gombe), Attahiru Bafarawa (Sokoto), Muazu Babangida Aliyu (Niger); Chimaroke Nnamani (Enugu); Sule Lamido (Jigawa); Gbenga Daniel (Ogun); and Ibrahim Shehu Shema (Katsina).
The ex-ministers are Nenadi Usman, Bashir Yuguda, Jumoke Akinjide; Bala Mohammed; Abba Moro and Femi Fani-Kayode.
Others include a former Chief of Defence Staff, Air Marshal Alex Badeh; ex- Chief of Naval Staff, Vice Admiral A. D. Jibrin; a former Chief of Air Staff, Air Marshal Mohammed Dikko Umar; a former Inspector-General of Police, Sunday Ehindero; and a former Chief of Air Staff, Air Marshal Adesola Amosu; Chairman Emeritus of AIT/ Raypower, High Chief Raymond Dokpesi; Waripamowei Dudafa (a former Special Assistant (Domestic) to ex-President Goodluck Jonathan); a former Chief Judge of Enugu State, Justice Innocent Umezulike; a former judge of the Federal High Court, Justice Rita Ofili-Ajumogobia;
Also on the list are a former National Publicity Secretary of Peoples Democratic Party (PDP), Olisa Metuh; Chief Jide Omokore; Ricky Tarfa; and Dele Belgore (SAN).
Most of the affected persons are currently facing trial for alleged corrupt practices in different courts.
The list was generated from cases and proceedings filed by the Economic and Financial Crimes Commission (EFCC), the Independent Corrupt Practices and Other Related Offences Commission (ICPC), the Nigeria Police, and 17 other agencies.
The document indicated that many of those affected had earlier been placed on similar legal restrictions by the courts and security agencies including restriction of movement, seizure of passport, temporary forfeiture of assets, freezing of accounts and others.
Executive Order not witch hunt – Presidency
Reacting to condemnations that trailed the executive order, Senior Special Assistant to the President (Media & Publicity), Mallam Garba Shehu in a statement on Sunday said: “Following the instant judicial affirmation of the constitutionality and legality of the Executive Order 6 (EO6), President Muhammadu Buhari has mandated the Attorney-General of the Federation and the Minister of Justice to implement the Order in full force.
“To this end, a number of enforcement procedures are currently in place by which the Nigeria Immigration Service and other security agencies have placed no fewer than 50 high profile persons directly affected by EO6 on watch-list and restricted them from leaving the country pending the determination of their cases.
“Also, the financial transactions of these persons of interest are being monitored by the relevant agencies to ensure that the assets are not dissipated and such persons do not interfere with, nor howsoever corrupt the investigation and litigation processes.
“It is instructive to note that EO6 was specifically directed to relevant law enforcement agencies to ensure that all assets within a minimum value of N50 million or equivalent, subject to investigation or litigation are protected from dissipation by employing all available lawful means, pending the final determination of any corruption-related matter.
“The Buhari administration reassures all well-meaning and patriotic Nigerians of its commitment to the fight against corruption, in accordance with the 1999 Constitution (as amended) and the general principles of the Rule of Law.
“Accordingly, this administration will uphold the rule of law in all its actions and the right of citizens would be protected as guaranteed by the Constitution.
“We, therefore, enjoin all Nigerians to cooperate with the law enforcement authorities towards ensuring a successful implementation of the Executive Order 6 which is a paradigm-changing policy of the Federal Government in the fight against corruption.” Governors beg WHO for intervention over UK, Canada’s travel ban on Nigerians 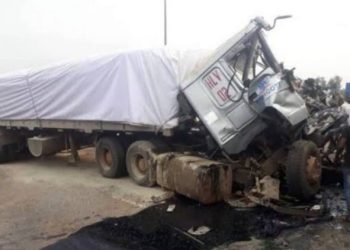 Atiku never wanted to be my vice in 1999 – Obasanjo