by Oghenekevwe Uchechukwu
in Politics
Reading Time: 2 mins read
A A
0 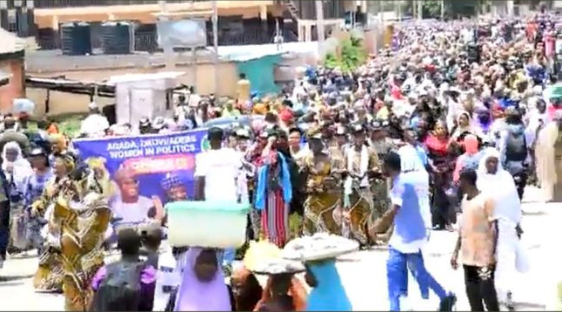 The APC had published an old video from 2019 which they passed off as a recent campaign rally staged for Bola Tinubu Kogi State.

Nigerian netizens have sharply criticised the ruling All Progressives Congress (APC) for publishing a 2019 campaign rally video, which they passed off as recent.

The Labour Party (LP) has held several rallies across several states in the country. The most recent ones were staged simultaneously on Saturday 1st October, riding on the back of the 62nd anniversary of Nigeria’s Independence, and drew thousands of supporters in Akwa-Ibom, Bauchi, Edo, Ebonyi, Kaduna and Lagos states.

In a seeming show of popularity bragging rights, the Spokesperson for the APC Fetus Keyamo published a rally video at 9:55pm on Sunday via his verified Twitter account @fKeyamo, which he claimed was held in the Kogi State in support of his party’s presidential flagbearers Bola Ahmed Tinubu and Kashim Shettima.

Along with the video which showed a large crowd, he posted: “We showed them how to do a proper march today in just one town in Kogi; no borrowed crowd; everyone here has a PVC (go and verify 🤣🤣). This is organised by proper ‘structures’, not ‘keypad activists’! Gradually, we shall separate the boys from the men!”

Nigerians took him up on his challenge and subjected the video to scrutiny. The result showed that the purported rally campaign video was recorded in 2019 and the prominent banner pictured the Governor of Kogi state Yahaya Bello, in the middle flanked by two men.

Nigerians on Twitter have called him out for his deceit. Daniel Regha wrote: Festus, the fact that you cannot campaign for Tinubu without mentioning Peter Obi shows u are frightened; you mention the Labour Party & other presidential candidates more than you advertise Tinubu. You are obviously hustling for your pay but hope you are ready for the repercussions”.

Another Twitter user victor mark-onyegbu commented on the video: “From forcing your godfather to ride a bicycle to posting a fake rally video, it’s been from one PR disaster to another. A healthy man doesn’t need to prove anything. The pressure is clearly making you all act so desperate and it shows”.

A resident of Kogi Richard Adugho said it was sad that while the people of the state were distressed by the floods that have claimed at least three lives and sacked many communities, particularly in Ibaji Local Government Area of the state, the party spokesman insensitively published the fake video.

Nigeria is battling what experts say could be the worst floods in the last decade with more than 300 people killed in 2022, spokesperson for the National Emergency Management Agency Manzo Ezekiel disclosed last month.

According to authorities, the floods which have affected 27 out of Nigeria’s 36 states and capital city have affected half a million people, displaced more than 100,000 persons and washed away thousands of hectares of farmland.

Meanwhile, in response to the backlash he received, Keyamo on Monday retweeted another video published by The Nation and wrote: “These are women who are appreciative of the efforts of @officialABAT over the last 23 years to see to the rapid development of Lagos. They’re not guided or blinded by tribal sentiments. They will speak and do so loudly in 2023. The neophytes think they can teach us how to march!”