by Bartholomew Madukwe
in Entertainment, Religion
Reading Time: 2 mins read
A A
0 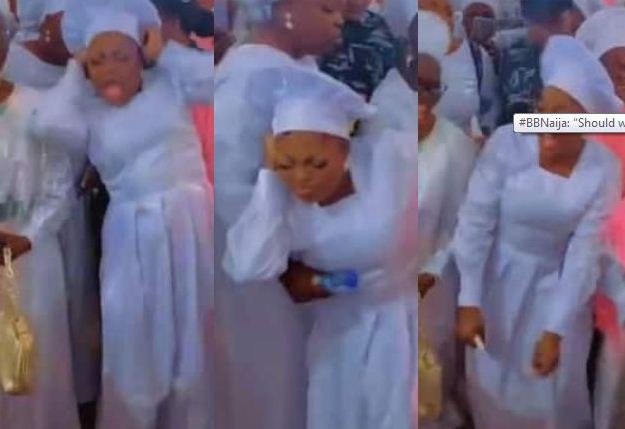 A video showing Nollywood actress, Funke Akindele in a trance while worshipping with Christ Celestial Church in Lagos State has caused several reactions.

The said video captured the moment the actress and Lagos state deputy governorship candidate of the Peoples Democratic Party (PDP) disclosed that she was born and raised in the Celestial Church of Christ (CCC).

The actress turned politician, made the revelation when she called on the clergy of the church to pray for her, as she embarks on her political endeavour.

In a video shared on social media, on Sunday, by CCC Wonderland Parish, Akindele said she was born and raised in CCC, adding that her case could be likened to a lost sheep who has returned home.

“I was born and raised in Celestial. My situation was like that of a lost sheep that God calls back home,” she said.

Speaking in both English and Yoruba languages and donning the church’s white garment called ‘sutana’, Akindele said she had always come back to the church in secret for solutions to challenges.

In a new video The actress turned politician was spotted dancing and worshipping with the church’s white garment, then suddenly she was touched by the spirit and went into trance.

Some reactions culled below:

dumebiblog wrote: I guess it’s a movie because what the heck is going on here?

Chidinma Patty wrote: What politicians can do!

KteeSkincare wrote: I know sha that she’s a very good actor. Any other thing wey dey happen for this video, I no Sabi.

Legalslinder wrote: We didn’t see video of her going into trance all these years it’s not that she’s going for deputy governorship, she’s suddenly being taken over by the holy spirit. Una go dey alright at the end.

Akindele starred in the sitcom I Need to Know from 1998 to 2002, and in 2009, she won the Africa Movie Academy Award for Best Actress in a Leading Role.

She rose to fame for her role in the movie titled Jenifa which earned her the nickname Jenifa.

The Omo Ghetto trilogy contributed to her fame.

Akindele played the lead role in the show Jenifa’s Diary, for which she was named the Best Actress in a Comedy at the 2016 Africa Magic Viewers Choice Awards.

In 2022, she was nominated by the People’s Democratic Party gubernatorial candidate, Abdul-Azeez Olajide Adediran, as the running mate for the 2023 Lagos state governorship election.

[Devotional] IN HIS PRESENCE: Be grateful for and engage each day

2023: Wike speaks on PDP Crisis, says something will happen soon