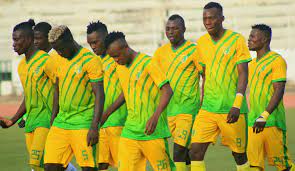 One of the two club sides representing Nigeria in this season’s  CAF Champions League, Plateau United started off on a fine note after playing out a 2-2 draw away from home.

Gabonese side AS Mandji came back  twice in the encounter to equalize to savage a point from the Jos side, all four goals were scored in the first half of the encounter.

The clash held at the Stade Franceville on Saturday.

Fidelis Ilechukwu’s side dominated play in the game and were unlucky not to get a win.

Meanwhile, the country’s other representative in the competition, Rivers United will host Liberia’s Watanga Football Club on Sunday at the Adokiye Amiesimaka Stadium, Port Harcourt.

Nigeria club sides have failed to make it to the group stage of the CAF Champions League in recent years with Enyimba football club dropping to the CAF confederation’s cup on many occassions.