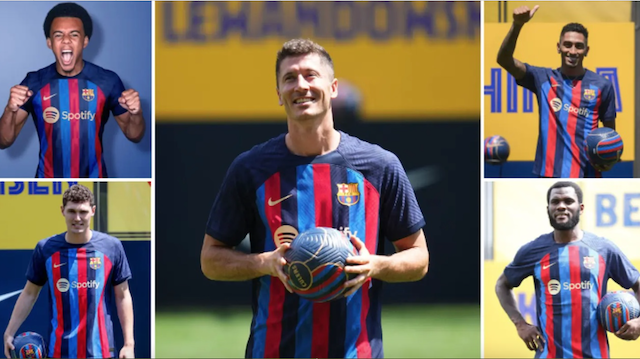 TheNewsGuru.com (TNG) reports that two players who recently renewed their contracts were also affected and Barca have been given a condition to fulfill before they can play.

Players who had their contracts renewed affected by the wage bill saga are Sergi Roberto and Ousmane Dembele.

TNG reports all players cannot be registered by FC Barcelona for the new La Liga season. However, Barca have been given a condition they must meet before all seven (7) players affected can play.

FC Barcelona must slash its wage bill as the condition to fulfil before Lewandowski, Raphinha, Kounde, Kessie, Christensen, Roberto and Dembele can play.

TNG reports Barca spent a combined £150 million on Lewandowski, Kounde and Raphinha in the transfer window.

The summer spree baffled many, who cannot understand how the Spanish giants were able to splash the cash given their situation.

But as per The Mirror, it has emerged that La Liga blocked Barca’s attempts to enter their new players into the new system because they need more funds.

It’s a familiar predicament for the Catalonian outfit as last year the club needed the likes of Gerard Pique to take substantial pay cuts so that new signings at the time, Memphis Depay, Eric Garcia and Rey Manaj could play.

There have been reports that Barca have asked Pique and Sergio Busquets to replicate the gesture again, while they have offloaded the likes of Clement Lenglet, Dani Alves, Philippe Coutinho, Francisco Trincao, Oscar Mingueza and Riqui Puig.

Meanwhile, the club have more dead woods in the form of Depay, Neto, Samuel Umtiti, Sergino Dest, Miralem Pjanic, Alex Collado and Martin Braithwaite who could be offloaded.

However, it is likely offloading these players won’t be enough, and Barca have been told they must pull a fourth “economic lever,” according to The Athletic.

The third lever arrived earlier this week when they agreed to sell 25 per cent of Barca Studios to Socios.com, for a fee of €100 million (£83.7 million).

In addition, they sold 25 per cent of their TV rights over the next 25 years to Sixth Street, a US company.

These deals are believed to have raised €767 million but their next step could be to sell 49 per cent of their production company.

It is not clear at the moment if Barca would be able to meet the condition before the new La Liga season starts.