by Adebayo Animasaun
in Sports
41 3
0 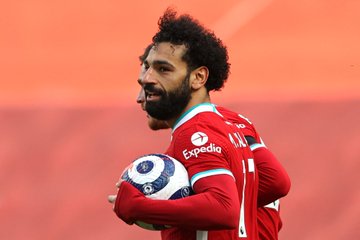 Liverpool star Mohamed Salah was delighted after their late, late victory over Aston Villa on Saturday.

Trent Alexander-Arnold scored an injury-time winner as Liverpool came from behind to beat Aston Villa and end a run of six consecutive defeats at Anfield.

Ollie Watkins – who scored a hat-trick in Villa’s 7-2 win in the reverse game – fired the visitors ahead with a shot which squirmed through Alisson.

And late on Alexander-Arnold curled home from the edge of the box after Villa failed to clear the ball.

Salah later said, “Finally! It was a great game, tough game but we won the game and that was the most important thing.

“We have lost a couple of games here and mentally it was like ‘oh no, not again’ but we did a good job second-half.

“It’s hard not to win at Anfield for a couple of games, we also missed a couple of chances in the first half and we were thinking ‘not again’ but the second half we managed to play good.

“It’s really important to win. I think there are only seven games left? So it’s really important. We want to play Champions League next year but we just need to focus on each game and try and win them all and hopefully, we can be in that fourth place.”

On Alexander-Arnold, he added: “I think he just needs to push himself. He’s been training well and he’s played really well the last couple of games. He just needs to try and keep focused – don’t listen to anyone, just try as hard as you can and it will come.”