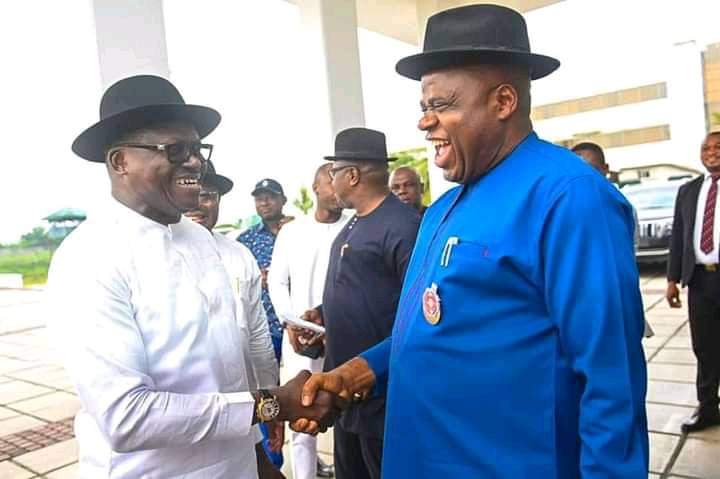 TheNewsGuru.com (TNG) reports Chief Alaibe took the fight for the governorship ticket of the PDP up to the Supreme Court level, where he eventually lost the legal battle.

The Apex court dismissed Alaibe’s case, challenging the emergence of Diri as the candidate of the PDP in the November 19, 2019 governorship election. The Court declined to delve into the matter, citing lack of jurisdiction as the issue was an internal affair of the party.

On Sunday, Governor Diri put differences aside and hosted Alaibe at his official residence in Government House, Yenagoa, being the first time Diri would meet Alaibe after the heated primary election.

“We have been in this political journey together for over 20 years and I am glad to reunite with him for the love and development of our dear State of Bayelsa.

“It’s indeed a new dawn! A whole new chapter has been opened as we all reflected on the past. Together, we can make that difference for our people,” Governor Diri said following the meeting.

Why I accepted to settle with Diri – Alaibe

Meanwhile, Alaibe following the meeting has opened up on why he accepted to settle with Diri, revealing that the Governor at several times, shortly after taking office, personally reached out to him.

He further revealed that it took the repeated interventions by mutual friends, business partners and political associates for him to finally consider it necessary to put an end to the ugly past.

Alaibe wrote: “We Are Back! After repeated interventions by mutual friends, business partners and political associates, I finally considered it necessary to put an end to the ugly past, drop political differences and re-establish age-old friendship with my brother and State Governor, Douye Diri. That happened on Sunday January 16.

“Let me state here that Governor Diri and I have come a long way. We have not only been political partners, there is a deep sense of brotherhood in our relationship. Somehow, in 2019, political differences thrust a sharp knife into that bond; and as the late Chinua Achebe would say, things fell apart and the centre could no longer hold.

“But then, blood is thicker than water. We both knew that what happened was temporal. Our mutual friends decided to wade in; especially those who knew what happened and believed that Governor Diri could not be held directly responsible. He only had favour thrusted upon him.

“I must admit that out of a deep sense of humility and friendship, Governor Diri had, at several times, shortly after taking office, personally reached out to me. I chose to remain silent as I reviewed the situation. But all that is now history. Time has healed the wounds and I have chosen to do the right thing.

“There is no doubt that the reconciliation will surprise a lot of people; particularly some political jobbers who profited from our temporary silence. What has happened might also be misinterpreted and given various colouration by different people. But the truth is that I have chosen to listen to the voice of wisdom and re-establish a cherished relationship; which politics tried to destroy.

“To demonstrate the sincerity of my intentions and reciprocate the same humility, which Governor Diri had displayed previously, I refused to meet him on a neutral ground. Instead, in company of close friends, I went to the governor’s official residence in Yenogoa and I was warmly welcomed by him and his team”.

2023: Don’t use the blood of your people to win elections – Gov Diri tells politicians

NRC suspends 8am train service from Ujevwu to Itakpe