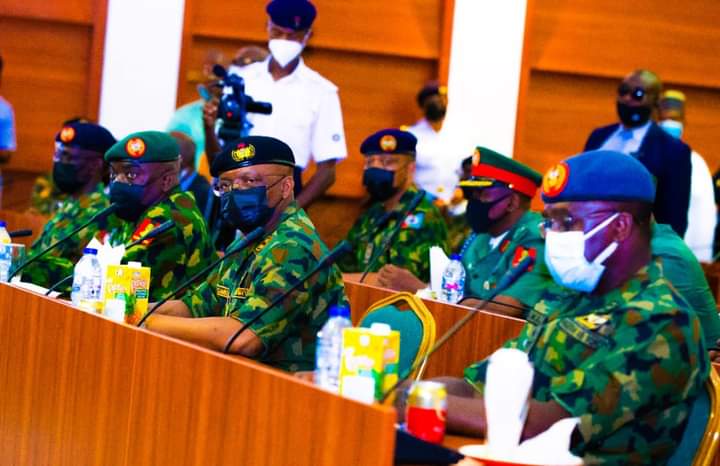 The Nigerian Senate has confirmed the immediate past service chiefs of the country as non-career ambassadors.

TheNewsGuru.com (TNG) reports the confirmation followed a report of the Committee on Foreign Affairs presented by Senator Adamu Bulkachuwa.

They were confirmed during plenary on Tuesday.

“On that call, the nominations cannot be nullified because we said they should be changed” – Senate President Lawan.

However, the confirmation of the former service chiefs as non-career ambassadors did not come without controversy as some Senators argued against their confirmation.

Especially, some of the Senators argued that the nomination of the former service chiefs as non-career ambassadors by President Muhammadu Buhari should be nullified.

Recall that Buhari had on the 5th of February sent the names of the former service chiefs to the Senate for confirmation as non-career ambassadors.

Nigerians condemned the nomination, arguing that it was a ploy to shield the former service chiefs from prosecution by the International Criminal Court (ICC) for alleged abuses committed by the Nigerian military under their watch.

Stating why the nomination of the former service chiefs cannot be nullified, Senate President Ahmad Lawan said: “I checked our resolutions and in some of our resolutions, we said the President should change, replace and remove them as Service Chiefs. They have been removed which I think it’s a plus for this Senate.

“Now if they are nominated for something that is different, I think our resolutions asking for their removal as Service Chiefs does not cross over to their nomination. On that call, the nominations cannot be nullified because we said they should be changed”.

Following the controversy on the floor of the Senate, the upper legislative chamber resolved into the Committee of the Whole to consider the report of the Committee on Foreign Affairs.

After reverting to plenary, the Senate confirmed the former service chiefs as non-career ambassadors.

“These nominees that we have just confirmed are nominees that have served this country to the best of their ability. Our appeal to the Executive is to make sure they use their experiences as military men to the best.

“We wish them a very successful career in their capacity as Non-Career Ambassadors,” Senate President Lawan said thereafter.

Jangebe abduction will be the last – Buhari